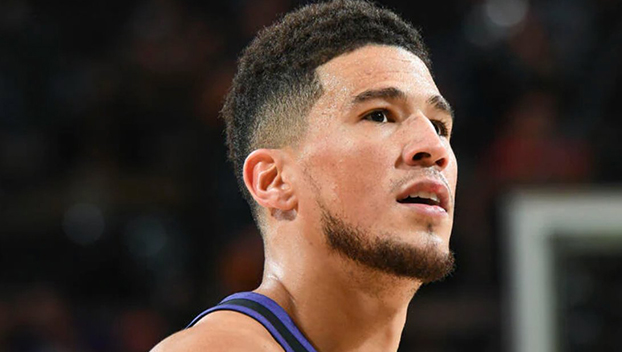 Devin Booker and the Phoenix Suns are tied 2-2 with the Milwaukee Bucks in the NBA Finals. Game 5 is set for Saturday night. (Phoenix Suns Photo)

Playing for Calipari taught Booker ‘ how to be a pro’

Devin Booker only spent one season at the University of Kentucky, but learned what it took to be a professional athlete..

“I learned a lot from Coach (John) Calipari — just how to be a pro,” he said. “I was 17, 18 years old at the time, so you’re only there for — well I was — for one year, and that’s not a lot of time to spend on a college campus. But he’s trying to push the most information he can to you in a short amount of time and understanding what your goals and your dreams are.”

Booker, now in his sixth season with the Phoenix Suns, has averaged more than 20 points per game in each of the past five seasons and helped lead the Suns into the NBA Finals. He averaged just 10 points per game and was the Southeastern Sixth Man of the Year. Even prior to suiting up for the Wildcats, Booker relayed his plans to Calipari.

“Before I went there, he had me tell him what do I want out of this program, what am I looking for?” Booker said. “And for me, that was to be a pro. So he holds you to that standard every single day. That’s how you push and that’s how you get to that level, is somebody consistently being honest with you.”

Like the rest of his former players, Calipari has tracked Booker’s progress on and off the court and has been impressed. Booker scored 27 and 31 points, respectively in the first two games of the Finals. He had 10 in a loss to the Bucks on Sunday night.

“I couldn’t be prouder of Devin Booker,” Calipari said. “Obviously what he’s doing on the court in the NBA Finals right now makes me smile, but who he has become as a person and as a leader — amazing stuff.”

Calipari has yet to attend a game between the Suns and Milwaukee Bucks in the Finals, but Booker is hopeful his former coach will attend Game 4 set for Wednesday night. The Suns lead the series 2-1.

“We haven’t been in touch much this Finals run (but) I actually think he’s coming to the next game,” Booker said. “I think I heard that.”

“(It) needed to be done at some point before the season,” Calipari said. “He and his family decided to be proactive and have it done now rather than wait. We are all happy it went well and he will be back better than ever and ready to go for the season.”

Frederick transferred from the University of Iowa at the end of the season. He led Covington Catholic to the KHSAA state championship in 2018 and was named state tournament Most Valuable Player after scoring 32 points in the title game.