DockDogs event draws competitors from across the U.S. 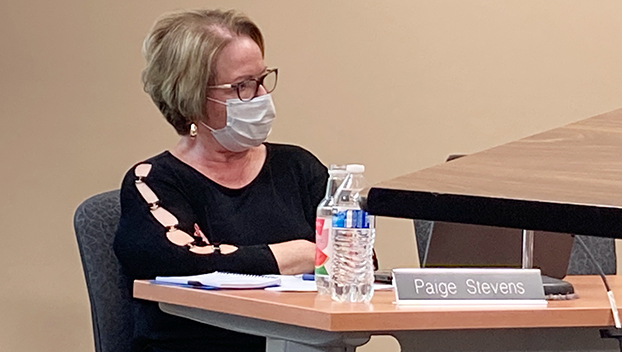 Paige Dyche Stevens has resigned from the Danville Board of Education and will be moving out of town. Her departure from the board is also a good time for her to explain her “despair” over the direction that the district is heading and her inability to change the path forward.

Stevens is the second board member to resign in the past three weeks who cited a decision to move out of Danville to pursue other interests. But Stevens wants to use the opportunity to point out and question several aspects within the district that needs to be addressed.

During Monday’s special called school board meeting, Stevens first apologized to the board for making the public announcement via social media on Friday, before notifying the board of her departure.

Before reading from her post announcing her resignation, Stevens said what she had written and was saying was “what is on my mind and in my heart.”

“It is with mixed emotions I share that I will be resigning from the Danville Board of Education effective August 4th and moving home to London. I had the opportunity to purchase a house my grandfather built in 1917.”

She added, “A large part of my motivation is the health and well-being of my brother. Another part is my despair over decisions made or not made in the district the last few years, especially this last school year.”

In an interview on Sunday, Stevens said, “So much of what has happened to the district didn’t have to happen.”

Stevens declined to name names and give specific examples of the decisions she believes has been detrimental to the district because they are “personnel matters.”

She did say though, “I wish I could do something positive for those who are still grinding away and trying to make Danville Schools the best. We have incredible staff members who have given and given and given.”

But many students need extra help with more moral support and encouragement from staff members who have left the district for a variety of reasons, Stevens said. Some of those staff moved to other districts and some wanted to stay, but their contracts were not renewed, “And now, a lot of their (students’) mentors are gone.”

“We had some incredible elementary and high school personnel,” she added.

Stevens said there are students who are also transferring to the Boyle and Mercer counties school districts this upcoming school year. And some teachers have decided to go to other districts as well. “I want to know why.”

Stevens asked why no one called any of the families and teachers and said, “What can we do? We’d like for you to stay. What are we missing?” She added that even if there was nothing administration could do, they could “at least listen to what they have to say.”

Stevens said, “The strength of Danville schools are the families” who want their children and other children to succeed. Even if they can’t afford to give money to support their children’s schools, “they give time and energy. … And they are appreciative and are willing to invest their time.” For example, they may cook a meal for the team and do “all the extra things,” Stevens explained.

“The family connection is one of the strongest things the district has.”

Stevens said, “In my opinion a lot of staff, students, and parents have had their spirit broken.”

And the disappointment they feel, especially from recent staffing changes, and other “little things” have contributed to their broken spirits “because they love the system and the schools so much.”

Reading from her written statement she continued, “I chose to try to be a member of the board because I bleed blue. I fell in love with the district in 1983 when I became a member of the sixth grade team at Bate. I have always believed that the Danville Schools could be a model program. We were often very close and then a keystone fell out. We had the perfect combination of resources, talent, staff and student to be an elite program of academics, athletics and arts to make others green with envy. A place for all families. A place where all students were valued. A place where others wanted to get in. A place where all could do their part with happiness.”

But recently, because the administration didn’t take the time to get to know the district and the varied socio-economic backgrounds that the students come from, and the strong family support, many decisions have been made that are not good for the district, Stevens said.

“The last few years have been difficult for our district in large part to people making decisions without knowing and understanding our district. It is unique. Any district will have ups and downs but Admirals know and expect many more up than downs.”

Stevens said the district could be much better.

“It’s not always sunshine and lollipops. Sometimes we have to say there is a problem and fix it.”

Stevens said the unexpected purchase of her grandfather’s home and subsequent move, “gave me an opportunity to exit without turning into a curmudgeon on the board. I can’t bare the lack of being proactive on so many big things. At the rate we are going I am not sure how the district I love is to survive.

“I am not walking out on the district; I am giving someone else with more time and ideas to serve. I believe my fellow board members want what is best for the district. They are good men. But I don’t think there is time to talk. We must have action and I can’t make it happen.”

Later, Stevens compared how the district’s administration presents the school system’s spirit and attitude to the public, to the character Scarlett O’Hara who turned green velvet drapes into a fancy dress to impress Rhett Butler in “Gone with the Wind.”

She added, “You can’t solve an issue until you acknowledge it.”