Business wants to turn assisted living space into a… 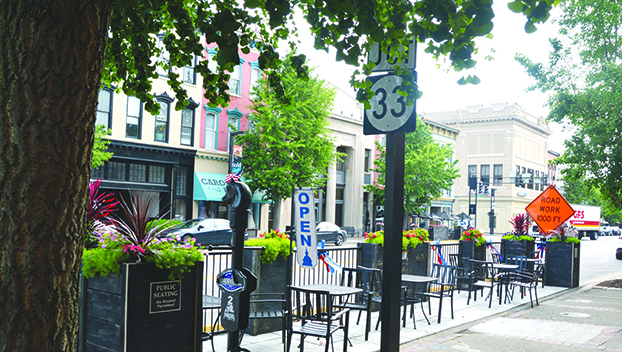 This parklet is currently stationed in front of Bluegrass Pizza and Pub on Main Street in Danville. - Photo by Olivia Mohr

With the lifting of COVID-19 guidelines will come removal of the three parklets the city of Danville has placed along Main Street, which is a state road. The Kentucky Transportation Cabinet is requiring the removal.

The parklets, which can be disassembled and reassembled at different locations, are currently stationed outside of Bluegrass Pizza and Pub, Copper and Oak, and Maple Tree Gallery. They have provided public outdoor seating, which businesses have utilized during the pandemic when indoor capacity was limited.

At the June 14 city commission meeting, City Engineer Josh Morgan said the city is drafting guidelines for moving the parklets onto city streets. He anticipates these guidelines will be finalized sometime this week. KYTC has not given a specific date when the parklets will need to be removed from Main Street, he said.

“We want to try to move them from where they’re at to their new locations without having to take them to the garage, take them apart, put them back together again,” he said. “The less we do that, the longer they’ll last, theoretically.”

“That’s what it will take,” Morgan said. “It’ll take us going out to the site, making sure it’s a good site, but we put some guidelines together as far as where they can be located.”

Some of the drafted guidelines for those wishing to apply for a parklet license, which haven’t yet been finalized, are that the parklets will not be able to block utilities and will be maintained by the adjacent business or institution, that parklets be placed on streets with posted speed limits of 25 mph, and that parklets generally be two parking spots long, “though both shorter and longer proposals may be considered.”

“I think we can find new homes for them,” Morgan said. “I think we can make good use of them, and they met the goal we intended for them to meet during COVID.”

In how Morgan said he hopes the parklets being moved onto city streets will fit into the downtown master plan, he said one aspect of the master plan is that the city wants to “expand vitality” of Main Street over onto side streets.

“And I think this could possibly help with that,” he said. “You know, if we had new business popping up on Walnut and popping up on Broadway or popping up on Second Street, those are places that these parklets could end up that could help those businesses, provide outdoor space for them.”

Mayor Mike Perros asked Morgan to clarify for his sake and the public’s sake how it is that the city got the parklets, then got their white barriers, which are to block them from traffic, and now have to come down.

Morgan responded, “KYTC is traditionally someone that has very strict guidelines with how they deal with roads, and I think COVID created a situation where they had to react more than usual on the fly, and I think they tried to work with cities like us to do things that helped out with the situation, and then as the year went along and they had more time, they started developing guidelines.”

Commissioner James “J.H.” Atkins asked how the city should respond if there was confusion on the part of restaurants if the seating in the parklets is for just their customers or for anyone downtown, a question he said they already receive, especially if businesses will need to apply for permits to have parklets stationed outside their businesses. Morgan said that the parklets would still be public seating, for anyone who wants to sit there.