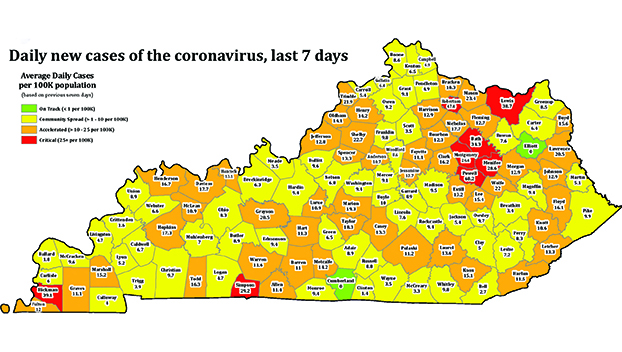 As Gov. Andy Beshear continues to call for a total 2.5 million Kentuckians to get their first shot of a Covid-19 vaccine, using it as the marker for when he will lift all capacity restrictions on most businesses, one state official says it’s time to ditch that plan and simply set a date to reopen the state.

“It is unrealistic to think that this governor is going to reopen the state and lift restrictions immediately,” Agriculture Commissioner Ryan Quarles writes in an op-ed. “That’s why I am challenging the governor to set a full reopening date to give our people certainty and the ability to plan for a responsible reopening.”

Beshear has said that getting 2.5 million Kentuckians is not a random number when it comes to lifting capacity restrictions. He has also noted that as Kentucky moves toward this goal he is willing to incrementally lift some restrictions, as he has already done, he said after Quarles’s statements.

“Because so many Kentuckians have rolled up their sleeves for these vaccines, these shots of hope, we’ve been able to increase capacity in most businesses to 60% and return child care classrooms to their traditional sizes,” Beshear said in a news release Wednesday. “We’ve been able to shorten and simplify Healthy at Work minimum requirements. We’ve been able to lift the mask mandate for smaller, outdoor events. That’s all because of you. And as more Kentuckians get vaccinated, it will be safer to lift even more restrictions.”

Beshear reported 1,837,229 Kentuckians have received at least one dose of a Covid-19 vaccine, or 41% of the population. Of those, 2,053 were given Tuesday, leaving 662,708 more Kentuckians needing a first shot to reach the governor’s 2.5 million goal.

Quarles, a Republican, is a leading prospect for the party’s nominee to face Beshear in the 2023 election for governor. He says it’s time for Beshear to follow the direction of GOP governors in Tennessee and Florida who have fully re-opened their states, saying Beshear “is holding Kentucky’s economic engine hostage.”

Noting some estimates that it could be August before the state meets Beshear’s goal, he calls the governor’s plan to wait until 2.5 million first doses are given “absolutely unacceptable,” adding, “The longer Kentucky refuses to open up, the longer we will lose jobs and workers to other states.”