Looking Back: Humphrey was Presbyterian minister in the 1800s

Too much stuff leads to spring cleaning

It’s important for us all to reach the milestones in our lives that make us happy. I’m been blessed enough to accomplish several of these moments.

The most recent is the purchase of our new house. After slaving away for decades at my 9-5 job, the stars and planets all aligned to allow the purchase of our retirement home. I don’t know if the banker was on crack or just confused but for some reason I was approved for the mortgage and here we are.

Looking at the houses is the fun part. The real work begins when you start packing up your stuff to move. I had absolutely no idea that I had so much stuff.

Somehow, I had managed to stuff every closet and storage building I had with my stuff so that it was out of sight and out of mind. It was an extremely delicate scenario. Opening up the wrong door at the wrong time could lead to me being covered up with my own stuff and never to be heard from again.

Once I was forced to start digging through this stuff in order to pack it to move, I realized that all the spring cleaning I had done in past years past was just a facade on my part and evidently I had not thrown anything out in a very long time.

One of the first things I found was my old G.I. Joe with the kung fu grip with half his face eaten off by a mouse. I had convinced myself years ago that it would be worth a fortune someday but maybe that day had come and went.

I found my old work shirt from my first job back in 1987. I wanted to throw it out but then thought about all the wonderful times I had at that job and realized that I had to keep it.

I found an old box full of baseball cards from the 1990s. I knew I had just made my fortune. Sadly, after a quick price review online I discovered they were essentially worthless. I started to throw them out but decided another 20 years might bright some value, so I threw them on the moving truck as well.

I found a box of old clothes I was sure that I could throw away. I saw my old Def Leppard T-shirt from a concert in 1991. No way could I throw that out. The holes in the sleeve don’t hurt it a bit. On the moving truck it went.

Then I came across some nice pants that were two sizes too small. I remembered I intend to go on a diet someday and these just might fit again. I’ll have to keep them. I then discovered a big wool coat with a fur collar. Not my style, but I might decide to hike in Alaska someday and I’ll need this. I better keep it.

It didn’t take me long to understand why I have so much stuff. I don’t know about you but in my experience I have never thrown something out that I didn’t end up needing again.

Will I ever need my pair of parachute pants and Members Only jacket from the 80s? Not likely but you never know. I better hang on to them.

I tried to hire some movers to help me out but when they saw all my stuff they just laughed. He walked away mumbling something about a cold day in hell. Not sure. 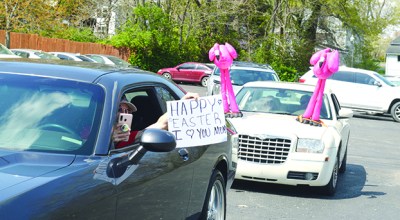