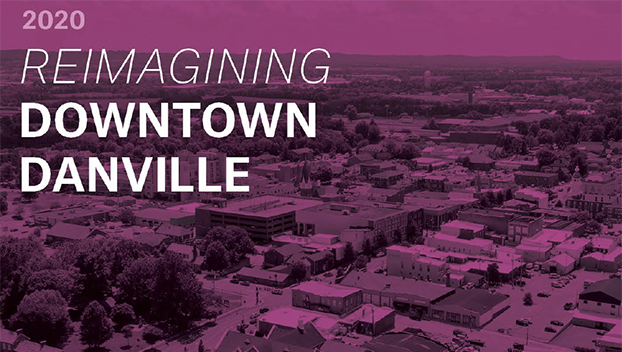 The Danville City Commission has approved a final draft of the downtown master plan going forward.

Jim Walters, project manager and author of the downtown master plan for the city, provided the booklet, titled “Reimagining Downtown Danville,” at a commission meeting Feb. 22, and it was approved. Walters is an architect with Joseph and Joseph Architects based in Louisville.

According to Joseph and Joseph’s website, Walters has worked on many performing arts centers, multi-family residential and office buildings around Louisville. He also founded Bravura Architecture, Interiors and Master Planning, which Joseph and Joseph acquired.

City Manager Earl Coffey said the city does not want to lose “the expertise and inspiration” Walters has provided.

“We will be looking for ways to continue the relationship which will aid in process of implementation,” Coffey said in an email. “We will likely be asking to maintain Jim in an advisory role.”

Though the plan is a final draft, it’s not necessarily set in stone. Mayor Michael Perros said during the meeting that it’s also not something the city can invest in all by themselves — the city will need private entities to pitch in.

Coffey said the document “is not generated to produce a list of specific work tasks.” Rather, it is a “vision or plan of ideas to allow more vibrant economic opportunities downtown.” This includes “improvements” to Main Street street scape, re-imagining Walnut Street and downtown financial investment, he said.

“We are planning to have discussions with the commission and others about these and other subjects,” he said. “However, the commission has authorized the design of the Main Street street scape, which is underway.”

He said activities are already happening, like the city purchasing the Danville Independent Schools district’s old Jennie Rogers building and the five acres it is on for $637,000 — the Kentucky Department of Education must approve the sale —  according to previous Advocate-Messenger reporting, and Coffey said in previous reporting that the city doesn’t have an immediate plan for the property but wanted it because the city saw it as an asset to the parks master plan and the downtown master plan.

Coffey said the city is identifying tasks within the seven districts the master plan breaks downtown up into and is seeking to assign them to the appropriate people. For example, engineering is working with the Art Center of the Bluegrass “on the short term plan of activating their parking lot space on the north side of the building.”

Some key takeaways from the document

• ReAnimate: A Black history project that emphasizes the old Black business district on Second Street and using augmented reality and other forms of storytelling

• Using Walnut Street, which now is primarily focused on access to buildings and parking, for more pedestrian space to better connect Centre College and Constitution Square