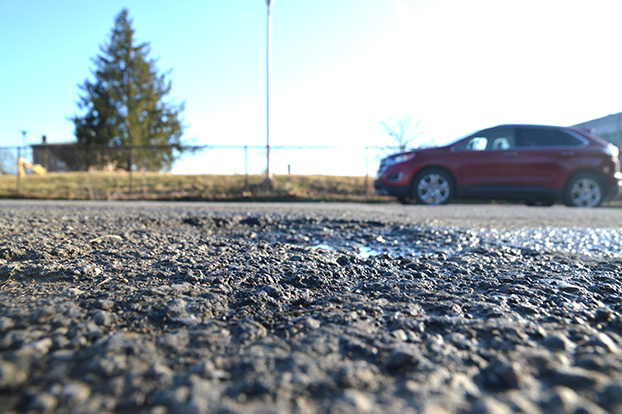 Water pools in a pothole on W. Martin Luther King Blvd. near its intersection with Third Street. - Photo by Olivia Mohr

Following last week’s ice storm, you may have noticed the new potholes that have appeared on roads across the county.

According to a press release from the Kentucky Transportation Cabinet, motorists are advised that highway crews will be using the break in winter weather to work on maintenance issues, including potholes. In highway district seven, which includes Boyle and 11 other counties, people should expect to see maintenance workers around the district and be prepared to slow or stop when they approach a work zone.

Potholes form from three factors: excessive moisture beneath pavement, the freezing and thawing cycle and traffic volume, according to the release. Water seeps into roadway cracks, which turn into potholes. Freezing and thawing causes pavement to expand and break, which is why potholes increase during extreme cold and precipitation. During the winter, workers use cold mix to repair potholes, and during warmer weather they use a hot asphalt mix, which helps smooth rough spots, according to the release.

KYTC focuses on state routes and does not give monetary assistance to local governments for pothole repair work because they have their own funding sources, said Natasha Lacy, public information officer with the KYTC. However, at times the state highway department does assist city and county governments with other items, she said.

On state routes, “Currently, we are patching potholes with asphalt cold mix while the asphalt plants are closed,” she said in an email. “We stockpile materials in the fall for the winter season.”

Lacy said there are 12 highway districts in Kentucky, all of which have staff who check routes within their districts. The Transportation Operations Center in the KYTC’s Frankfort office is staffed 24 hours a day, seven days a week and monitors routes, sending information about issues to all 12 districts. She said district seven gets updates from the TOC and responds to calls, emails, social media posts and letters from the public about potholes and other issues.

She said KYTC doesn’t track pothole repair costs for each winter, rain or flooding event. Crews repair and patch potholes all year long, and “the money spent for pothole operations is part of the yearly budget allocated for ongoing maintenance.”  Employees from district seven and the other 11 districts in the state that worked last week during the winter weather are the same people who repair the potholes.

“In addition, the crews continue to clean up storm damage that may have occurred (cutting/removing trees/branches and debris),” she said. “All of this is dangerous work which requires numerous safety measures.”

On a county level for county-maintained roads, county engineer Duane Campbell explained that the county’s dump trucks are equipped with snow removal equipment, which will remain on the trucks for a few more weeks.

“This will slow our response to potholes in the immediate weeks to come,” he said in an email. “If the pothole is really bad we will try to find a way to fill it. We patch potholes using an asphalt product that remains workable until well compacted by traffic.”

Campbell said deeper potholes are actually easier to patch than more shallow ones since “the patching material performs better and stays in place better the thicker the patch.” The patching material has been restocked, and when the county finishes removal of low-hanging limbs that resulted from the ice storm, it will be able to focus on potholes during milder days, Campbell said.

As for the cost of the county patching potholes, Campbell said it’s not very significant.

“The more significant cost is associated with resurfacing roads that deteriorate faster due to the sustained damage that a winter like this brings,” he said. “Our amount of resurfacing funds changes very little from year to year.”

He said a few years ago, that amount reduced slightly. The amount of resurfacing funds the county receives every year is related to the amount of fuel tax dollars received by the state each year.

“The cost of resurfacing continues to increase gradually from year to year,” he said, and “these two factors combined means the length and number of roads that we can resurface each year continues to decline.”

On the city level, Danville city engineer Josh Morgan said city staff will commit a day to filling as many potholes as possible when time and weather allows. He said currently, public services is working on tree debris cleanup and utility cut repairs resulting from the weather. According to a city of Danville Facebook post from Tuesday, public services will be conducting a curbside collection of storm debris, like tree limbs, and crews will make one pass through the city, so people within city limits should make sure all debris are placed curbside before March 8.

Depending on future weather, “potholes are scheduled to be filled within the next week,” Morgan said.

“It is difficult to determine what road damage was caused specifically by the weather event, but staff is documenting repairs with our new work order system,” he said.

In other news, the city of Danville declared a state of emergency for the ice storm beginning Feb. 11 during a city commission meeting Monday. City attorney Stephen Dexter said the emergency management director requested the city pass the designation to make potential funds for reimbursement available from the Federal Emergency Management Agency, if they become available.  Morgan said public services is “closely monitoring and recording work done related to the winter storm event,” and “If a FEMA emergency is declared, we will be ready with itemized costs for reimbursement.”

To report a pothole:

• On Danville city roads: Download the “Danville KY” app from the App Store for iOS devices or Google Play for Android devices, and use it to report a pothole or other city-related issue. Or call 859-238-1200.

• On state routes, to the KYTC: Report under the “contact us” menu at the top of the KYTC website, transportation.ky.gov. Morgan said people can also report potholes on state routes by calling the KYTC Maintenance Garage at 859-239-7065.