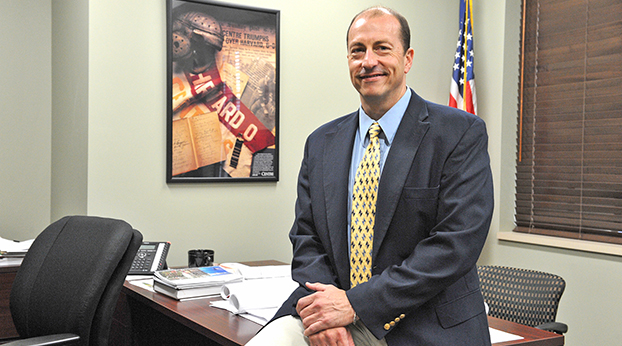 At a special called city commission meeting Oct. 16 following an executive session, Earl Coffey was selected as city manager for the city of Danville. Coffey’s previous role for the city was city engineer, and he was interim city manager while the city was going through its selection process after previous City Manager David Milliron’s employment contract was terminated in June. For the past couple of weeks prior to the selection of Coffey, the city commission has been interviewing four candidates for the position.

According to a press release from City Attorney Stephen Dexter, Coffey’s appointment came after a national search in conjunction with Slavin Management Consultants for a new city manager, and, according to the release, the appointment of Coffey by the Board of Commissioners was made with unanimous consent among those present. Coffey has had 20 years of experience with the city as a city engineer, and the terms of Coffey’s employment “will be memorialized in an agreement at the next meeting of the City,” according to the release.

In terms of Coffey’s career and educational history, he has been involved in heavy highway work, on large highway structures, in residential and condo construction, had exposure to the tunnel project at the Cumberland Gap, worked on the Interstate 66 Corridor study while at the University of Kentucky and, also at UK, spent time at the Center for Applied Energy Research, he said. He said he was born in eastern Kentucky and graduated from UK in 1996 with a master’s degree in civil engineering, and prior to working for the City of Danville, he had experience in consulting, research and construction. He said in an email that in his career with the city, the city has “observed and worked with many different leadership styles.”

“When we reflect on this history and consider the current work or issues facing the Community it seems so important for our City Manager to have local knowledge and relationships within the community,” he said in an email. “The experience with the City also has given me a unique perspective for every City department which I think will aid in the historical transition we are feeling within our workforce and our economic environment.”

Many things are on the horizon for the city, Coffey said, including several projects: a wastewater plant renovation, the Central Fire Station and parks development. The central effort, he said, will be economic development, including the implementation of the downtown master plan.

There are also challenges ahead, including workplace development, especially recruitment.

“Senior employees are transitioning into retirement or other phases of their careers at a high rate,” he said in an email. “Planning through the process of workforce turnover is a huge challenge. The competitive nature for employees will put pressure on compensation packages which will subsequently put pressure on revenue.”

Coffey said the human resources director has audited the first three aspects, and more discussion involving compensation is planned with the city commission. Previously, Coffey said, the commission has chosen to put improvements in place as they have been brought forward, including longevity pay for the fire department.

“The improvements are important and helps the City be closer to the market as pay adjustments are made as a result of the improvements,” Coffey said in an email. “In short, after our existing compensation plans are properly applied then we get a more accurate depiction against the market study.”

Coffey said the city is targeting Oct. 26, the next regular city commission meeting, to discuss next steps when it comes to compensation and seek feedback from the commission.

To Your Good Health: Are two vaccines better than one when it comes to COVID-19?