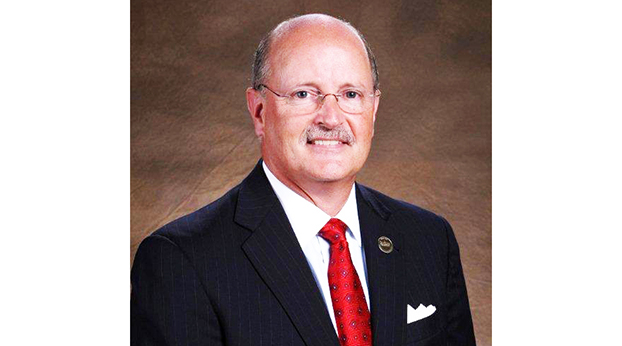 Greg Caudill, current CEO of Farmers National Bank, announced on Sept. 16 that he will retire effective Dec. 31. He has been working for the bank for 40 years and has held the CEO position for 18 years. Marty Gibson will be his successor as CEO. (Photo submitted by Farmers National Bank)

Greg Caudill, CEO of Farmers National Bank, will retire from his position effective Dec. 31 after working for the bank for 40 years and holding the position as CEO for 18 years, according to a press release. He made the announcement Sept. 16. Marty Gibson, the current president of the bank, will replace him.

Caudill said the succession plan has been in the works for the past three to four years. Caudill has wanted the shift to be as seamless as possible, and the transfer of authority has happened 11 other times in the bank’s history of about 141 years, according to the press release.

“It’s good to see it come to pass,” Caudill said.

Gibson, who is currently president of the organization, said part of making the transition smooth is that he has already taken on many of the responsibilities associated with the CEO position, particularly for the last 18 months, but for now, Caudill has final say on decisions until he retires. Prior to his position as president of the organization, Gibson was executive vice-president of lending for the bank. Gibson said after Caudill retires as CEO, Caudill will still serve as a director on the bank’s Board of Directors, and Gibson said he hopes he has picked up some of Caudill’s qualities.

“His leadership style is inclusive, but at the same time, he’s one of those people that leads by example,” Gibson said.

Gibson said in his experience with Caudill as a mentor, he has known him to provide steady guidance, to put thought into decisions and major situations and to maintain his composure during difficult times. Gibson said Caudill leaves behind big shoes to fill because he held the position as CEO of the bank during the Great Recession and also held the position when the COVID-19 pandemic began.

“I really can’t do justice in trying to put my thoughts together in describing Greg’s leadership and what he has meant to me as a mentor,” Gibson said.

During the pandemic and during his time as CEO more generally, Gibson said one thing he wants to focus on is understanding customers’ needs and addressing them in a timely manner. He said the bank has already attempted to do this, as he said Small Business Administration Paycheck Protection Program loans were an example of something customers have needed during the pandemic in a timely manner.

He said there are a lot of unknown things when it comes to the economy and customers’ situations moving forward due to the pandemic, but he is looking forward to carrying on the bank’s goings-on. He said the bank just had its first acquisition, which was of Farmers Deposit Bank in Casey County, a step he said is good to have under Farmers National Bank’s belt for the future. He also said Caudill often refers to Farmers National Bank’s management team as among the best of any community bank in Central Kentucky, and he agrees with Caudill on this.

“That’s one of the things that I look forward to, is continuing to work with this management team and our entire staff,” Gibson said.