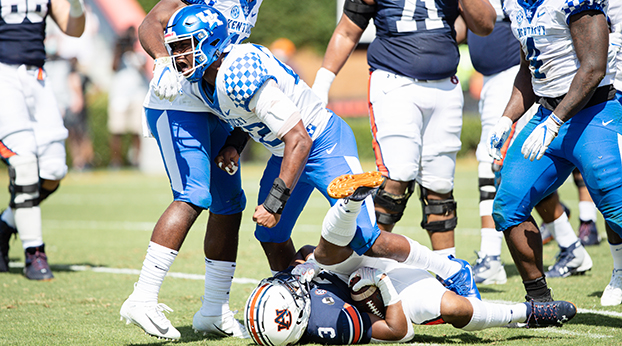 DeAndre Square, center, had five tackles at Auburn while wearing No. 22. (SEC Photo)

Cats honor teammate Oats with wearing of his #22

No matter what had happened at the Kentucky-Auburn game Saturday, Kentucky was going to be a winner,

Or at least that is what this old guy thought because of the decision coach Mark Stoops, his staff and UK players made to make sure they remembered injured teammate Chris Oats all season.

Oats was likely going to be one of the leaders for the UK defense this season. He played in 12 games in 2019 and had 46 tackles, fifth on the team. In the Belk Bowl win over Virginia Tech he had five tackles, including two tackles for loss.

However, the four-star recruit from Cincinnati suffered an undisclosed medical emergency during the summer. No details have been shared on the issue other than he was moved to a rehabilitation facility in June.

A different Kentucky player will wear Oats’ No. 22 each game like linebacker DeAndre Square did at Auburn. Oats’ roommate, tight end Keaton Upshaw, will wear No. 22 when the Cats host Mississippi this Saturday in the home opener.

“It was very emotional,” Oats said after UK’s 29-13 loss. “It was good to honor him. I had fun wearing his jersey and will just continue to pray for him.”

The team is also wearing #22OATSSTRONG wristbands that defensive lineman Josh Paschal proudly showed off to media members after practice last week to show support for Oats. The Cats also end each practice with “22” in honor of Oats and created a website www.22OATSSTRONG.COM with a GoFundMe page to help their teammate’s family with medical bills.

“Obviously Chris is always on the top of our minds,” defensive coordinator Brad White said. “He’s a vital part of this team. Even though he may not be with us on the practice field physically, his presence is always felt.”

White said having others players wear No. 22 would be “special and emotional” each week for him as well as the players.

“I know each player who gets to wear it is going to take great pride in wearing that,” White said.  “His development as a player was off the charts.  I think he was put in position to have a huge junior campaign.”

Paschal remembers what it was like before the 2018 season when he was diagnosed with malignant melanoma and needed three surgeries followed by regular immunotherapy treatments before getting to play in three games late in the season.

“When I got diagnosed my teammates were there for me 100 percent. Same for Chris. Anything he needs, we will be right here,” Paschal said. “When we first got the news (about Oats) my first thought was I wanted to be there for him but with the pandemic I did not have the opportunity be there physically. But we are all there emotionally. He knows he is loved by us and has 100 brothers willing to fight for him. We love him.”

It’s hard not to love him. His dream job is to be a sports analyst, probably one reason he’s such a good interview. He likes to pay the piano and says three words to describe him are “kind-hearted, hardworking, determined.”

White prefers to think that Oats is the “definition of a fighter” with the way he played.

“We draw strength from him,” White said.

Paschal knows what UK is missing on the field without Oats.

“We are missing a great player, instinctive player. A linebacker who shot gaps and ran sideline to sideline,” Paschal said.  “Chris was a dog on the field and that’s what we are missing.”