Coffee with Mimi: Time is of the essence, but… 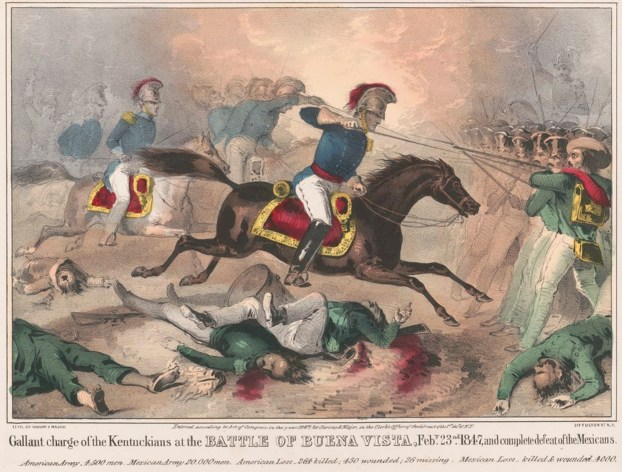 Wikipedia photo The Battle of Buena Vista in Mexican War.

Jacob Keller Bishop of Danville was one of few soldiers from Boyle County who survived the Feb. 23, 1847, Battle of Buena Vista in the Mexican War, according to articles in The Advocate-Messenger archives.

Bishop, a native of Mercer County, enlisted in the Harrodsburg Company under Captain Thompson, at the outbreak of the war with Mexico.

He commanded the Harrod Guards in the Mexican War and the Salt River Tigers in the War of 1812. He won his eagles for gallantry in the Battle of New Orleans.

Captain Bishop, as he was referred to after the war, along with A.W. Barker, James Harlan, W.P. Wade, Jack Bosley and James Allen, were lined up with Major General Zachery Taylor forces in the famous Battle of Buena Vista in February 1847, when both sides claimed victory.

Mexican General Antonio Lopez de Santa Anna withdrew his forces with cannons and flags and left the battlefield to the surprise of American forces, who expected to be in battle a couple of days, according to an article onWikipedia.com

Taylor lost 500 of his unit compared to the 1,500 lost by Santa Anna before the Mexican army retreated. The Americans claimed victory.

Sixteen years later, when Bishop was 39 years old, he registered with the military in July 1863 during the Civil War.

Bishop of Danville was in the wholesale business in the early 1900s and frequently made trips to other states to make purchases.

In about 1868, Bishop became a traveling representative with several businesses across the state and other states including New York.

The Lexington newspaper referred to Bishop “as the handsomest man in the Travelers’ Association.”

The Bishop family lived on Maple Avenue. He sold their 400-acre farm in Faulconer in 1890 to J.C. Caldwell.

Bishop was active in the Ryan Commandery of the Knights Templar in Danville. He and others from here attended a grand encampment of the organization in October 1889 in Washington, D.C., when 22,000 Knights attended.

He and his wife, Mary Jane Garrett, of Danville, were married Dec. 9, 1850, in Boyle County. They were Presbyterians.

They had one child, Bessie Fisher (1850-1931) who was married to Mack Fisher of Danville. They lived in Louisville.

Bishop died June 6, 1902, at the age of 75, at the home of his daughter, Bessie, in Louisville. He and his wife and their child are buried in Bellevue Cemetery.

At the time of his death, Captain Bishop also was survived by a brother of Harvey N. Bishop, and sister, Mrs. C.T. Robertson of Danville.