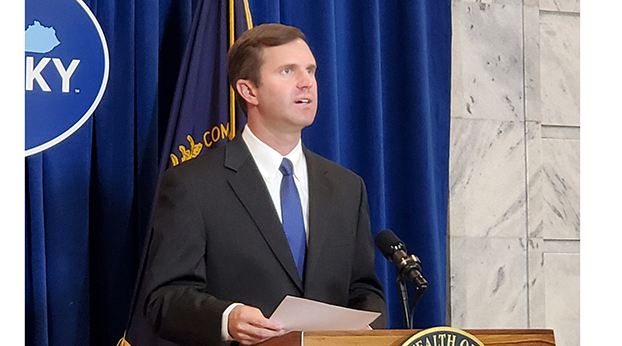 Gov. Andy Beshear announced that Kentucky reached a painful milestone on Wednesday as the number of people lost to the coronavirus has reached 1,000.

“Over 1,000 Kentuckians are no longer with us, because of a virus that had its first case in Kentucky just six months ago,” he said during a press briefing at the Capitol.

Beshear noted that compared with some states, the number is very low. ”That’s a testament to the people of Kentucky and the actions they have taken.

“But it’s hard to be proud or excited about the news, when we’ve lost over 1,000 of our citizens, all special people. Over the last six months, we’ve had over 1,000 families going through something that’s far, far too hard, and not being able to do it in that normal way of funerals, with families being able to get together to grieve.”

To honor the 1,000 Kentucky victims of COVID-19, the governor says he is ordering flags at all state office buildings to be lowered to half-staff for one week, starting Thursday.

“Families across Kentucky are hurting as a result of the tragic losses brought by this pandemic. We are lighting our homes and businesses green and ringing our bells daily for these victims, but this is one more way we can show our support for these members of our community as they mourn their loved ones.”

He will also have a Kentucky State Police honor guard do a wreath-laying in the Capitol Rotunda Thursday morning at 10.

There were also 667 new cases reported on Wednesday, which makes it 53,977 since the first one was reported in Kentucky on March 6.

Despite the increase in new cases, the state’s positivity rate dropped from Tuesday’s 3.91 percent to 3.84 on Wednesday, based on a rolling seven-day average. There have been at least 937,153 coronavirus tests performed in Kentucky, and at least 10,725 Kentuckians have recovered from the virus.

State Public Health Commissioner Dr. Steven Stack put some of the coronavirus numbers into perspective. “In the United State of America during the roughly last six months, more than 190,000 Americans have died from COVID-19,” he said. “The city of Louisville is about 620,000, so it’s like 30 percent of the city of Louisville has died across the country.”

Stack also noted that while 1,000 deaths in Kentucky is a tragedy, “It’s a smaller tragedy than we might otherwise have had. If we had not taken the steps over the last six months, we would have had larger totals like they’ve had in other states and in other areas. So, I’m grateful that we’ve had the opportunity to blunt the harm, but the harm that’s happened is substantial nonetheless.”

Instead of a 4 p.m. press briefing Thursday afternoon, Beshear says he will be delivering a speech, which can be seen on his Facebook page and YouTube channel, at 5:30 p.m.