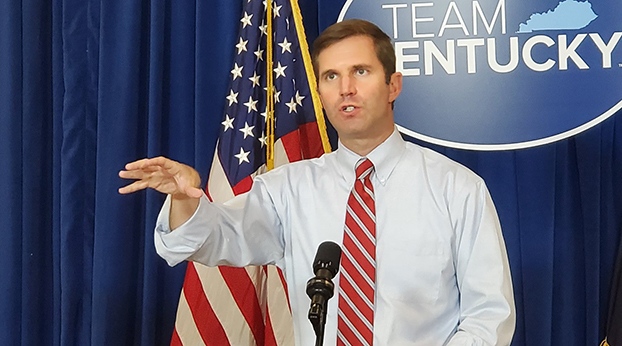 Gov. Andy Beshear announced on Tuesday a big spike in new cases as well as eight deaths due to the coronavirus.

Beshear himself had a bit of a scare when both he and first lady Britainy Beshear were not feeling well. Out of an abundance of caution, they were tested for COVID-19 to protect themselves and those around them.  The test results for Gov. Beshear and his family came back negative for the coronavirus.

Still, instead of a live press briefing in the Capitol Rotunda, he recorded a video on his Facebook page.

A total 562 new cases were reported on Tuesday. Eighteen of the cases were from children ages 5 and younger, including an 18-day-old from Hardin County, a 1-month-old from Rowan County and a 3-month-old from Lincoln County.  The total number of coronavirus cases in Kentucky has now risen to 35,793.

“This thing is real, it’s out there.  We’ve got to make sure we’re doing everything we can to fight it,” the governor said.  “While my family ended up negative today, I know there are a lot of families out there that are positive.  We send you our love, we want you to get better.  We want to make sure we’re not spreading this to any other family that has to endure any of that hardship.”

While Monday only had 245 new cases, Beshear said at the time that the lower number had to be taken with a grain of salt.  He noted that a technical issue with the state’s data processor caused a delay in some reporting, leading to lower numbers that will be updated later this week.

There were also eight new deaths reported on Tuesday, bringing the total to 783 the number of Kentuckians who have lost their lives to COVID-19.  They include an 86-year-old man from Grant County; a 79-year-old woman from Hopkins County; three women, ages 54, 65 and 84, and two men, ages 75 and 93, from Jefferson County; and a 60-year-old man from Ohio County.

As of Tuesday afternoon, there have been at least 711,017 coronavirus tests performed in Kentucky, and the positivity rate currently stands at 5.87 percent.

On Monday the governor issued a recommendation that schools not reopen for in-person classes until Sept. 28.  He said the decision was driven by four factors: Kentucky’s cases being near a peak, an increase in infection rates among children across the U.S., the experience of school districts in other states, and families continuing to travel to hotspots for vacations, such as beaches, against the advice of health officials.

He also reminded Kentuckians that effective on Tuesday, a new executive order allows bars to reopen and restaurants to increase their capacity from what had been 25 percent, the past two weeks.  Both bars and restaurants can now operate at 50% of capacity, as long as other guidance requiring social distancing, facial coverings and sanitation is followed.

For more on key updates, actions and other information on the response to the coronavirus pandemic by Gov. Beshear and his administration, go to kycovid19.ky.gov.

Beshear says he still plans to do another COVID-19 press briefing Wednesday at 4 p.m., ET.