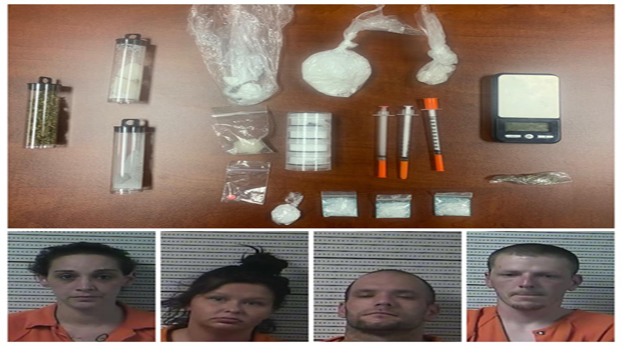 The release states that BCSO deputies Wren and Hopper, along with K9 Deputy Abbott, conducted the traffic stop and upon further investigation discovered Stokley to be in possession of methamphetamine, heroin needles, and distribution bags. After arriving at the Boyle County Detention Center, a search discovered more drugs Stokley had hidden.

Burgin was found to be in possession of multiple substances at the site of the traffic stop, including heroin, cocaine, marijuana, oxycodone, scales, and distribution bags.

Robbins was discovered to have marijuana in her possession at the traffic stop and upon search at the Boyle County Detention Center, other drugs were discovered.

Miranda Robbins was charged with possession of marijuana, trafficking methamphetamine, tampering with evidence and promoting contraband.

Jodie Lee was charged with operating a motor vehicle on a suspended license, no insurance, and careless driving.