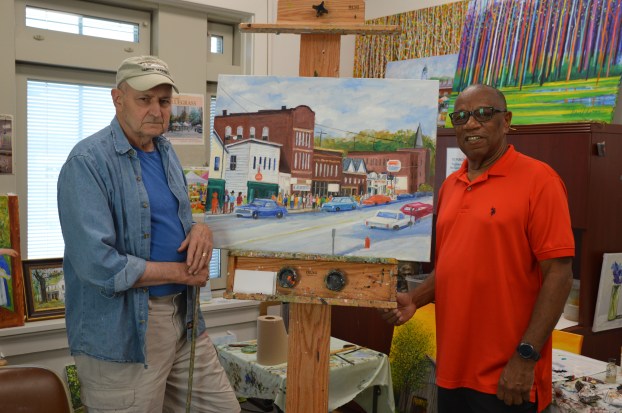 David Farmer, left, and Michael Hughes, right, collaborated to produce a series of paintings that recall the vibrancy of Second Street in its heyday as the African American Business District of Danville last year.

The Danville-Boyle County African American Historical Society now has a place to call home, and it’s located on North Second Street, which was historically an African American business district decades ago.

Michael Hughes, president of the DBCAAHS said the room they’re leasing is at 108 North Second St., in the old Henson Hotel. He said they were “very excited” about being able to set roots in the old African American business district. “We really wanted to stay in the district,” Hughes said.

The space was home to The State Restaurant in 1942; Boyle Typewriter Co. in 1951; and Round the Clock Coin Operated Laundry in 1960. It’s also the location of at least two hair salons, according to research by member Michael Denis.

“We’ve been needing a place to meet and display our memorabilia, photos and posters,” Hughes said, including the school bell from Stoney Point School that someone wants to donate, and a baseball uniform from an African American team member who lived in Danville years ago.

It will also be a safe space to store the extensive collection of historical documents pertaining to local African Americans who have lived in and had businesses in Danville and Boyle County which were researched and collected by member Michael Denis, Hughes said. These include cemetery records and Civil War soldier lists.

Now that the organization has a centralized, permanent location, members hope to share what they’ve discovered about the local historic African American community with the public, Hughes said.

“The word ‘permanent’ means to us that we’re not going anywhere. It gives us a sense of place as opposed to running around all over looking for somewhere to meet, and to store our stuff,” Denis said. “We envision it as a place for us to meet, but more importantly, as a place to teach and share what we have preserved of African-American history in Danville and Boyle County. Up to now, the only time we were able to share our information and displays has been at Pioneer Playhouse for two weeks, and at the Soul of Second Street Festival for two days.”

Once settled into their new office, the group plans to set up outside photo displays sometimes and put up other displays during special events at Constitution Square in order to make the public more aware of the once-thriving African American businesses in Danville.

The space, “Is not real big,” he said. But there’s a lot of potential to perhaps expand someday.

For now, the group wants to spruce up the room with a fresh coat of paint, hang its old photos and set out displays of memorabilia that’s been hidden in a storage area for a long time, Hughes said. He also added that he was adamant about installing a security system. “We have things that can’t be replaced.”

Once open, he also hopes people returning to their hometown will want to stop by, see the old photos and visit.

Dues to join the Danville-Boyle County African American Historical Society are $15 a year for adults and $5 a year for students. Dues collected will be used for rent, paint and the purchase of a security system.