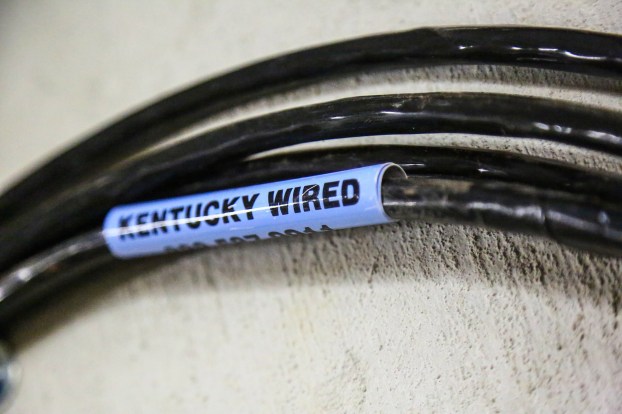 A coiled fiber-optic cable labeled as part of the KentuckyWired broadband internet project hangs on the wall in a room in the basement of the Boyle County Courthouse. (File Photo)

Concerns about lack of internet access in Boyle County has brought forth ideas from local leaders about possible solutions.

A statewide project, KentuckyWired, aims to help solve the issue, not only in Boyle County, but across the commonwealth.

Rob Morphonios, CEO of KentuckyWired, said the initiative is a “pioneer project” that could make a major difference in Kentucky.

“We give a lot of great credit to the commonwealth for thinking about the state’s ability to provide high-speed broadband internet and coming up with what really is a pioneer project for a state to provide a backbone internet infrastructure,” Morphonios said.

KentuckyWired aims to construct more than 3,000 miles of high-speed, high-capacity fiber optic cable in every county across the state. In Boyle County, the project would help provide internet access to areas such as the Forkland community that have long struggled with lack of high-speed internet access.

The KentuckyWired network is a “middle mile” project connecting government offices, universities, community colleges, state police posts, state parks, and other government institutions to the global internet.  Anywhere along its path, internet service providers will be able to connect to the network and bring faster, more reliable internet to every corner of the commonwealth.

What exactly is a “middle mile” project? The Kentucky Communications Network Authority compares it to an interstate system.

“Think of it as an interstate highway system, or middle mile, that will connect the worldwide internet to “exit ramps” closer to a community,” a release from KCNA states. “Internet service providers (ISPs), such as the cable or phone company, can then connect their equipment and fiber system to the KentuckyWired network to create a high speed link between the global internet and local communities. ISPs will be the ones to actually extend fiber to a home or business.”

The project also hopes to allow cellular providers to connect and ultimately build more cellular towers throughout the state, which is also an issue facing many Boyle County residents that live in more rural areas of the county.

The project will work in partnership with local internet service providers. One of those providers in the Danville/Boyle County area is Kentucky WiMax, which has an office in Danville on Lebanon Road.

Morphonios said he hopes to see local providers get involved in order to provide optimal service to their customers.

“Now that we are approaching completion of the network, what we’re trying to promote is those that want to be a part of our network, they start talking to their local internet providers and start making plans to find out how they can connect to our system and give their customers the advantages of being on this system,” Morphonios said. “From what was provided before versus now, we’re trying to bridge that digital divide.”

A recent report from the Advocate-Messenger noted that nearly one in four households in Boyle County do not have an internet subscription, and in the midst of the COVID-19 pandemic, the need for reliable internet access has grown substantially.

“The pandemic has really shown this to be an issue,” said Donald McGhee, operations manager for Kentucky WiMax in Danville. “People need internet access.”

“These are unprecedented times that have really forced the issue if you’re going to have a small business or have kids trying to learn remotely or telemedicine or numerous things you could name,” Morphonios added. “These have really highlighted and shown how important access to fast, reliable internet is for everyone.”

As for the timeline moving forward, Morphionos said the ring that encompasses Danville/Boyle County is nearing completion and things are moving forward swiftly across the state.

However, McGhee noted that the issue of lack of internet access is not one that is easily resolved.

“Access will always be an issue,” McGhee said. “We do the best we can and technology is always changing. We try to reach as many people as we can.”

More information about the KentuckyWired project can be found online at kentuckywired.ky.gov.