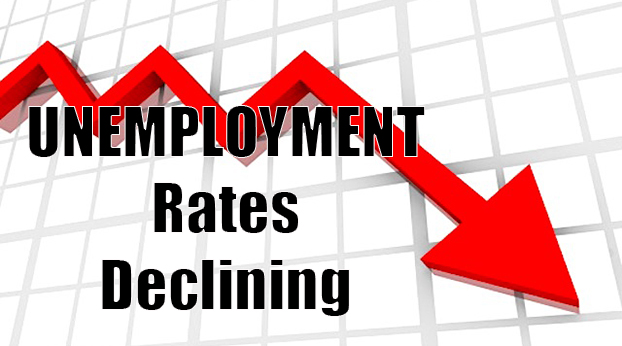 Unemployment numbers on the decline locally

COVID-19 has caused a drastic increase in unemployment across the state of Kentucky, and Boyle County is no exception.

A report from the Kentucky Center for Statistics, an agency of the Kentucky Education and Workforce Development Cabinet, showed Boyle County recording a 12 percent unemployment rate during the month of May.

The report shows a combined labor force of 12,241 in Boyle County, with 1,474 of those being unemployed.

To show the stark difference in unemployment, during the same time period last year, Boyle County’s unemployment rate was 4.4 percent.

However, the report did show a notable decrease compared to April, where Boyle County’s unemployment rate sat at 19 percent. Comparing the numbers month-to-month doesn’t provide the most accurate representation, according to a release from the Kentucky Center for Statistics, due to the fact that these statistics are not seasonally adjusted, which takes into account such factors as weather changes, harvests, holidays, etc.

Jody Lassiter, president/CEO of Develop Danville, said the decrease from April to May shows how well the workforce and local economy is rebounding from the COVID-19 shutdown. With the phased reopening of the economy in Kentucky beginning on May 11, Lassiter said, the May rate partially reflects the first wave of employees returning to work.

Looking at where the local economy stands today, he said, the workforce is nearly back to pre-pandemic levels.

“As of today’s date, our industrial sector has nearly returned to its pre-pandemic employment levels with the total of permanent layoffs numbering less than 100 per the information that we are regularly monitoring,” Lassiter said. “Most industries, particularly those supplying the automotive industry, ramped up during the month of June. We have at least four industrial employers that are actively advertising for available jobs.”

The main restriction now, according to Lassiter, is the retail and hospitality industry. Those sectors are still working with many government restrictions.

“Because Danville is a services hub for a multi-county region, we have a proportionately larger number of hospitality and retail jobs impacted because those service businesses are still operating under restrictions imposed by the governor,” Lassiter said. “As the hospitality and retail sectors recover more slowly, so will the employment levels in those sectors.”

Unemployment statistics are based on estimates and are compiled to measure trends rather than actually to count people working. Civilian labor force statistics include non-military workers and unemployed Kentuckians who are actively seeking work. They do not include unemployed Kentuckians who have not looked for employment within the past four weeks.