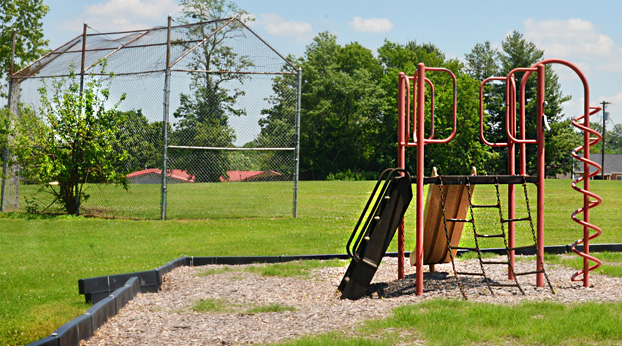 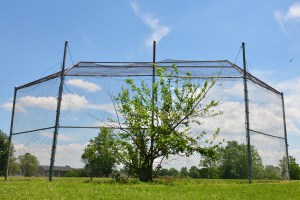 An old ballfield at Jackson Park off of Crosshill Road hasn’t been used for ballgames in years. The only piece of equipment left at the field is the backstop which has a tree growing through it. (Photo by Robin Hart)

Three Danville parks will get handicap accessible playground updates and an abandoned ball field will be restored if the city receives a grant it recently applied for through the Department of Local Government on behalf of the Danville-Boyle County Parks and Recreation Department.

If awarded, the Land Water Conservation Fund Grant totalling $250,000 will be used at Jackson Park, Cowan Park and Millennium Park, according to the grant application written by Danville-Boyle County Convention and Visitors Bureau Director Jennifer Kirchner, city engineer Earl Coffey and parks & rec director John Bell. This is a matching grant where Danville will have to approve spending $125,00 in its upcoming budget in order to receive the additional LWCF $125,000 grant, Kirchner said.

“The nature of the grant is to help communities access funds with their own ‘skin in the game,'” Kirchner explained.

According to the application, the project will include:

In 2018, Danville developed a masterplan for a comprehensive park & rec department which prioritized plans to build inclusive playgrounds in the city’s parks. This grant opportunity will assist in those efforts, Kirchner said.

According to the grant application, Danville’s park playgrounds “have accomplished what is required by law,” however, “we acknowledge we need more inclusive play spaces to serve every member of our community.”

For example, using ADA standards, some playgrounds have accessible swings, but the rubber mulch used prevents a child in a wheelchair from getting there, the application reads.

Parks & Rec intends to develop playgrounds that serve special and typical children’s needs in a way that “diminish bias and misinformation about people with disabilities,” according to the application. “These parks become destinations.”

The two ball fields at Jackson Park haven’t been used as they once were because of the popularity of Millennium Park’s fields. While one has been used regularly by youth softball teams, the second ball field is just a wide-open field without bleachers and fencing and a tree is growing through the old backstop.

However, a shift in population “is drawing attention back to this park and the surrounding neighborhoods,” the application read, and Millennium Park fields can’t meet the needs for more use.

The field at Jackson Park, “is a perfect example of how a former space can be revitalized through a renovation and provide much needed space for youth baseball, softball and T-ball.”

The application stated, “The revitalization of this field and surrounding amenities will allow for this park to quickly become a jewel to the adjacent neighborhoods.”

Since Danville has recently acquired the Danville-Boyle County Park Board, the new Parks & rec department will oversee all of the maintenance for the city park system. Therefore, all playgrounds, including Jackson and Cowan parks, will be part of a monthly and annual playground inspection program. And, the Jackson Park ballfields will be maintained on a weekly basis.

If awarded the grant, it will be officially announced in the fall, Kirchner said.