‘You can’t fight violence with violence,’ says mother of… 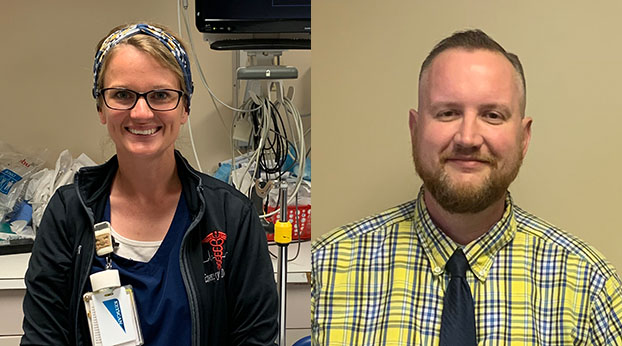 Since various social-distancing restrictions hit in March, to protect the public from the widespread of COVID-19, medical personnel have had to jump into brand new practices to protect patients, and themselves. And at the hospital, there were many changes associates had to learn to enact, and quickly — from those creating the new protocols, to the nurses and doctors enacting them at the patient level.

Amber Hamlin, a charge nurse in the ER of Ephraim McDowell Regional Medical Center, was asked if the current virus protocols took some adapting to get used to.

“Adapting — a great way to say that,” Hamlin said, who has been a nurse for 14 years, 10 of those in the ER. “We’ve had to adapt to the changes, how we do everything in the ER, down to the triaging of our patients when they come in.”

The hospital staff has had to change the way they’ve done things for so long, she said, which was a learning curve initially, all in the middle of a pandemic. “It was a growing pain for us. But we have it down to a routine, now.”

For patients showing any signs of being infected with COVID-19, they are immediately taken to an isolation room. According to the Centers for Disease Control, those symptoms could include fever or chills; cough; shortness of breath or difficulty breathing; fatigue; muscle or body aches; headache; new loss of taste or smell; sore throat; congestion or runny nose; nausea or vomiting; or diarrhea.

“The rooms have a door so we don’t expose potential COVID patients in the ER. Also, having to wear the mask and goggles the whole time we’re here, that’s different for us …” Hamlin said.

She said the hospital has taken a lot of steps to ensure they are protecting themselves, “along with the ones we’re taking care of; every patient.”

Probably one of the biggest changes has been no longer allowing visitors in the ER, obviously to protect them from exposure. “This is hard on patients. It’s a scary time when you’re in the ER.”

Hamlin said for some patients who come into the ER, the next step is surgery. “They have to go alone,” she said, meaning no family members coming in before or after their procedure. “We’ve had some very apprehensive about that.”

But, she said once the protocols have been explained, “once we say this is why we’re doing this, they understand. Everyone’s been wonderful about it.”

Hamlin said the staff has been great, too. “I think our staff has been wonderful with communicating with patients’ families, allowing them to Facetime before and after, that made them feel a lot better, having contact (with their families),” she said.

When staff leaves after a shift, they must change their clothes so they don’t take anything home to their families. “That’s been different, too.”

There is a hotline set up through the hospital, for anyone showing symptoms to call and get guidance. “We have people who call (the ER), and we actually refer them to the hotline …” she said, which will screen the person to see if it’s appropriate they be treated there.

When those showing signs do come to the ER, they call from their vehicles. “They say ‘I have a fever, I’m short of air, have these symptoms.’ We go to their vehicle, put a mask on them, check their temperature. We go out in PPE (personal protective equipment), then bring them into the isolation rooms.”

For the patients who just need to be swabbed, they’re left in their vehicle. “We can swab them there and not bring them in, but they still have to check in as an ER patient. But we can do that from the vehicle,” Hamlin said.

Initially, the hospital had a tent set up outside the ER, but that’s not being used anymore.

“It was very stressful in the beginning, so many unanswered questions, it was new to everybody. That was very stressful to us. We’re called to do this service, to take care of our patients. But the exposure to us and our families and children, just the uncertainty of all of it …”

But, so far, things have worked out really well, Hamlin said, including local support.

“The community has been very supportive. A lot of people have provided lunches for us. Even the patients who come in, they’ve been very grateful for us, that we’re here, seeing them and taking care of them.”

Hamlin said she hopes everyone in the public realizes “we’re here and open, and it’s safe to come here. We’re not turning anyone away, and we’ll take care of them the best way we can.”

A lot of moving parts

“My life changed dramatically; it all started out on March 6.”

Jason Dean is the hospital’s executive director of clinical effectiveness, and is the point person for the organization with all-things-COVID.

But, he said the adaptation has been “good in a way.” Dean said the process created more of a patient-safety avenue, as well as what they can do to protect their associates, “in a different format than we’ve ever done before.”

Aside from the fact of the pandemic, Dean said he’s actually enjoyed the work. “To make sure we’re doing the right thing for our patients and visitors, as well as the general public.”
But in the beginning, Dean said there was a lot to dive into, and how it was all going to be handled. He described it as a moving target, due to everything changing so rapidly.

“At that time, testing wasn’t available. Had to work on how to get the testing, how to do it at the state level …” in order to provide all results back to keep track of those infected. “From across the nation, it was new to everybody.”

Dean said there were a lot of other moving parts in the whole scenario. He didn’t have to work only on the new procedures and protocols at the hospital, but across all of its clinic settings, in different locations. “And getting the word out to our staff and patients, that we’re going to be fine, but we’ll do this appropriately to protect.”

This included taking stock of PPE and keeping track with the latest testing capabilities for the public, as well as processes put in place for screening associates.

“As well as working to connect the health dots, and doing contract tracing appropriately,” Dean said, as far as interviewing infected patients to see who they’ve come in contact with, who should be notified.

“Making sure those contacts were also staying home, making sure if any other workers were around them, they’re getting tested, too. If you’ve been around someone who’s been positive, you can still work as long as you take steps. Keeping up with that has been a job within itself,” he said.

Dean said, “The biggest thing, we’ve got to act like COVID is going to be everywhere. Maybe it wasn’t there, but could be there now. We screen everybody … we increased our cleaning efforts to make sure it’s more frequent for high-contact areas, sanitizing …”

At first, Dean said less were coming to the hospital for treatment, when it all started. To him, it’s important to let the public know, “it’s safe to get out, if you’re following the guidelines. Sanitizing, wearing masks, it’s safe to get out to the hospital and go to doctors appointments. The community needs to know that we’re ready for them, we’re here. We don’t want to delay any treatments.”

Dean said telehealth services are being utilized now more than ever before, which he also feels is a benefit. They began offering it in the clinical settings; and patients can still opt for “virtual” appointments, if they feel more comfortable doing that.

“We had a survey done by the Office of the Inspector General, a state survey, going around to see that we’re doing everything appropriately and safely for associates, visitors and staff,” Dean said. They looked at all their documents, the screening process, and “felt like we’re doing an excellent job, with no further recommendations for us.” The survey was done at Ephraim McDowell James B Haggin Hospital, in Harrodsburg.

“We want the public to know we’re open and ready, and we will make sure they’re safe when they come through.”