Reopening not easy for local restaurants 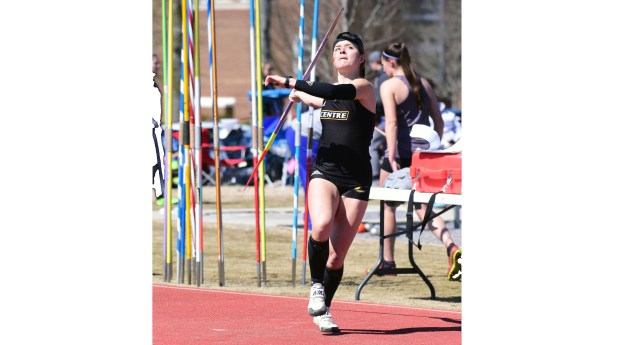 Centre College’s Meghan Owens is excited for her future at the college. Her freshman season was cut short after just one meet. (Centre College Photo)

However, for as long as she can remember, Meghan Owens always knew she probably would go to Centre College where her mother, Lisa Owens, coaches cross country as well as track and field.

“I always remember looking at the (Centre College) record board and it was a huge goal of mine to one day break the javelin record,” Meghan said.

It didn’t take long for that to happen. On the first throw of her first outdoor meet in March she heaved the javelin 142 feet, 1 inch (43.32) meters to break the school record by more than 12 feet. It was also a better mark than what won the 2019 Division III national championship.

“I was super excited. I had trained really hard and the year before I was injured and it did not go as well as I hoped,” Meghan said. “I was so looking forward to our first meet and needed to reassure myself what I could do. My first throw was about 10 fee more than anything I did last year.”

One meet was all she got, though, as COVID-19 quickly sent Centre students off campus and ended all spring sports.

“It was disappointing not to have a season but I was extremely thankful to have had at least one meet to get the record,” Meghan said.

Her mother/coach had big expectations for the freshman.

“I feel that she would have had a great opportunity to win a national title as a freshman as well as qualify for the Olympic Trials. She was primed and ready to throw 160 feet plus by the end of the season,” Lisa Owens said.

The Centre freshman knew one record-setting throw did not guarantee she would have won a national title but that one throw “lit a fire” in her to work even harder.

She was hoping to possibly qualify for the 2020 Olympic Trials before COVID-19 cancelled that when the Olympics were pushed back to 2021. She missed qualifying for the 2016 Olympic Trials by 12 feet. Automatic berths go to those who throw 170 feet or more but unless 22 throwers reach that mark, then Meghan says it is normal for throws in the mid to high 160’s to get into the Trials.

Her best throw was 156-10 two years ago but she was confident she could easily better that this year, something her mother also believed.

“Getting far enough to qualify was a very realistic expectation,” Meghan said. “Where I was starting this season compared to the season I threw 156 is not close. I am in much better shape. I put in more lifting, training for specific javelin muscles. All the coaches had worked together as a big team to put together the perfect training plan for me.”

She fractured her tailbone in a fall last year while hiking at Shaker Village in Mercer County with a friend. It had been raining and she slipped on metal stairs.

“I am very injury prone,” she laughed and said. “That was not the most pleasant thing ever to experience. But I was ready to go.”

She had Division I opportunities but always intended to stay open minded about college. The more she heard some athletes and coaches at major meets “almost preach” you had to go Division I if you were a good athlete, the more she knew she wanted to attend Centre.

“I wanted to make sure I would happy where I went,” she said. “About the only (competition) restriction at Centre is that I can’t compete in the Division I national championships. But I can compete in major meets and there’s no restriction on how hard I can work. I loved being part of a Centre team. They (team members) are all so great and supportive. I wouldn’t trade being here for anything.

“I was never part of a team at Mercer County (High School because javelin is not an event in Kentucky high school track). Here Division III athletes are competing because they love the sport and everyone is as passionate about track as me or they would not be here. I really like that.”

The freshman, who just finished her semester exams, even joined the cross country team that was full of “incredibly talented athletes and amazing people.” She was humbled by the way they accepted her despite her lacking of running experience because javelin and cross country are not events that mix together well.

“They are two completely different sports but I really love running. I don’t have as good of potential running as I do in javelin but I wanted to try cross county. My parents were not huge fans of me running cross country,” Meghan said.

She was leaner and not nearly as strong during cross country before getting back into the gym after running ended. She lifted weights, increased her calorie intake and added the weight and muscle mass needed for the javelin.

With free time now, she’s reduced her lifting and will soon start focusing on getting into shape for the fall cross country season. She did a recent time trial on the Centre track and finished a 5K (3.1 miles) in 19:52, 19 seconds faster than her previous best 5K.

“Now I know the time on the track doesn’t convert equally on a cross country course but I hope to keep improving the next couple of years because I really like being on the team,” Meghan said. “I have already grown as a runner in just one year of running distance.”

What about the javelin this summer?

“I am sure I will pick it up and throw it around some just to have fun,” Meghan said. “But my main focus for the first time will be on running and then I will transition back to the javelin later in the fall.”