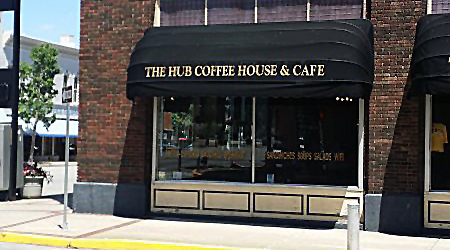 Reopening not easy for local restaurants

Jason Cullen, owner of The Hub Coffee House and Cafe, has seen his business take a substantial hit during the COVID-19 pandemic.

As restaurants were forced to shut down for in-person dining in mid-March due to the pandemic, Cullen said he has done his best to keep his two locations in Danville up and running, but the decline in business has certainly taken its toll.

Now, with restaurants permitted to reopen this weekend, Cullen said The Hub will be reopening, but the restrictions in place for reopening create a lot of burdens.

“We want to make sure people are staying healthy and don’t get sick,” Cullen said. “That’s what restaurants do anyway. We’re used to adhering to plenty of guidelines anyway. There are a lot of extra burdensome things we have to do though.”

Cullen is placing signs up to reiterate the importance of social distancing for customers coming into the shop on Friday and hopes he doesn’t have any issues.

One of the biggest constraints is the occupancy restriction. The governor’s office has told restaurants they can only allow 33 percent of their normal capacity in the restaurant at a time, and with restaurants already taking a financial hit for the last two months and typically operating on a thin profit margin anyway, Cullen said it isn’t a recipe for success.

“I’m doing a quarter of the business that I used to do,” he said. “And with only allowing a third of the people to come in, I’ll be lucky if I do half of the business that I used to do. We don’t have a lot of extra capital to adhere to a lot of extra things, and I think that’s going to be really hard on a lot of restaurants. A lot may not open back up because they see it as impossible and don’t have the cash to do it.”

The Kentucky Restaurant Association recently released a report that states the restaurant and food service industry lost as much as $550 million in sales during the month of April.

The loss of sales during the pandemic resulted in a reduction in staff at The Hub, with 11 employees being laid off, Cullen said.

Some other states that recently reopened restaurants opened them and allowed more occupants in at a time. For example, when Tennessee reopened restaurants, they were allowed to have 50 percent of their occupancy. Cullen said he thinks Kentucky could’ve allowed restaurants to reopen at a higher capacity while still being safe and taking public health precautions.

He said he feels that way because of the number of people that are in Walmart or Lowe’s at any given time during a day.

“I’ve said since day one that there are more people going through Walmart in an hour than go in my store all day,” Cullen said. “If they are able to stay safe and the employees are able to stay safe in those locations and have few cases of exposure, I think my small little restaurants are safe.”

The restrictions aren’t just burdensome in terms of the labor and strategizing needed to adhere to the new restrictions, but also the financial burden it places on local restaurant owners.

“A lot of the stuff we are being required to get, the cost of it has increased as well,” Cullen said. “The prices of masks, gloves, disinfectants, and all that stuff that you have to get has increased. Our profit margins are already extremely thin.”

These costs are in addition to increases for products Cullen regularly purchases for his business like meat, chips and more.

“Most of the supply chain is making sure that grocery stores are stocked,” Cullen said. “But most of us would say that trying to get things through our vendors has gotten a lot harder.”

One other challenge is bringing back employees. Cullen said some of his employees are concerned about the health risk of reopening. He said they mostly don’t fall into an at-risk category for COVID-19, but still, some remain concerned about going back to work.

Despite the obstacles, Cullen said he is ready to see people coming back into The Hub on Friday.

“We’re definitely ready for that,” he said.