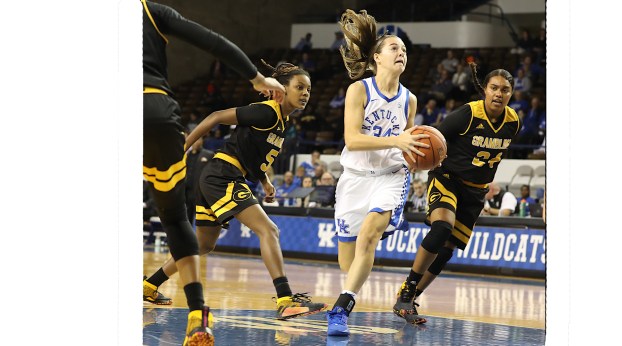 Emma King understood that her freshman season was a learning year and embraced what it took to try and get better. (Vicky Graff Photo) 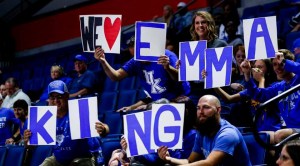 Emma King says she felt “blessed” to have so much fan support in a year where she did not play that much for Kentucky. (Vicky Graff Photo)

She scored over 2,500 points and had 750 rebounds in her high school career at Lincoln County and was nearly a 40 percent shooter from 3-point range.

Yet Emma King played in just 15 games her freshman season at Kentucky, scored only 21 points after averaging 18.5 points per game her final high school season and had just four 3-pointers all season.

So was she not as good as she thought or was Southeastern Conference play just tougher than she expected?

“I try to stay pretty humble. I have had confidence issues over the years,” King said. “I knew this would be the hardest thing I have ever had to do. I thought (Nike) EYBL might prepare me more from going against bigger and stronger players there. I thought if I could play EYBL with some success I could play college, but the difference is you are playing older players, sometimes 22 or 23 years old at times.

“The pace in college is so different, too. I heard about that my whole life but I didn’t really know until the first game. It was just incredibly different.

“As somebody who has always struggled with my confidence despite the success I’ve had, it made me realize that I have a whole lot of work to do. I had a lot of older teammates in front of me and I learned from their wisdom and basically had a year to figure out how to do things.”

She figured out quickly she had to get bigger and stronger and has gained about 25 pounds since her high school graduation, including close to 15 last summer after she got to UK in June.

“Last summer, that was pure muscle. I had never worked out like that before. We never lifted (weights) a lot in high school. We have access to all the food we wanted. Me and Blair (Green) would work out in the morning and then walk over and cook lunch,” King said. “I was eating more protein filled food and it helped. But I still struggled in practice. I came in scrawny and got pushed around. People like (All-American) Rhyne (Howard) just bullied me if they wanted.”

Assistant coach Kyra Elzy told her shooting was not her problem. Instead, technique was the big thing.

“She puts me through workouts that are completely different from anything I have done before,” King said. “It has been an adjustment but luckily my freshman year I could just sit back. There was not a lot of pressure on me and I had time to get better and learn.”

Coach Matthew Mitchell said she had a “good learning experience” and he had no problems with her work ethic and attitude. He liked how she “embraced” learning from veteran guards and didn’t let not playing in games change how she practiced daily.

“She thought her last practice (of the season) was her best practice of the year. She was not down in the dumps but was embracing the opportunity to get better,” Mitchell said. “She’s a great teammate and is respected because of her work ethic, character and the way she treats people. She is always so positive. Great in the classroom, too.”

Mitchell said he wishes every player would honestly evaluate their situation like King did and have the discipline and maturity to accept coaching to improve.

“The maturity she had to evaluate her freshman experience shows the type of person she is,” Mitchell said. “She is going to do what she has to do to be successful. We know she’s capable of making an impact on the court. God works in  mysterious ways. She came off the season on a high rather than a low because of that last practice.”

Don’t worry about King thinking of changing schools looking for more playing time. Kentucky is where she’s always wanted to be and that won’t change.

“I have no regrets at all. I know this is the place I am meant to be,” King said. “I am from a small town and people there support me no matter what but the amount of support I got even though I was not playing was amazing. People were reaching out to my mom and dad saying they were proud of me and loved watching our team which was great to know.

“There are people always in my corner and that’s a blessing. I am so thankful for each person that reached out, came to games, texted me or said something to my parents. I had so much support in a season where I really was not playing but the idea people cared and wanted to still watch meant so much to me. It’s just another reason I love Kentucky.”