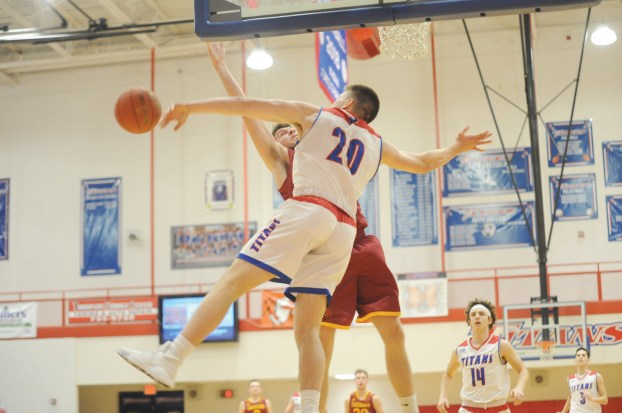 Trey Price gets a big rejection in the first quarter of Mercer County’s win over Garrard County in the first round of the 2A Sectional. (Photo Derek Brightwell)

Mercer County tops Garrard to advance to 2A second round

In a 2A Sectional Tournament first round double header, Mercer County took both games over Garrard County to send its boys and girls teams to the second round Saturday.

And both teams had to overcome one point first quarter deficits to do so.

The girls started Thursday evening’s proceedings with a rematch from a Dec. 12 meeting. That matchup was not competitive as the Titans steamrolled the Golden Lions en route to a 69-33 victory.

Thursday’s final score may look similar, but the path there was very different.

“Three weeks ago, we weren’t even in the same area code as that team. Three weeks we’ve improved so much,” Garrard coach Jimmie McCulley said after the game. “They battled, they fought for 32 minutes. They left it all out on the floor, I don’t care what that scoreboard says. I’m proud of my kids. I love them to death. If we get that effort the rest of the year, I’ll be happy.”

Garrard County got out to an early lead, taking a 21-20 advantage into the second quarter. McCulley said that his team’s fast start was partially because they believed they could upset the Titans.

“First time we played them, we got hit in the mouth and it was a bit of a shock. That’s the most athletic team we’ll play all year other than Danville. They’ve got one of the best players in the region and we were shell shocked,” he said about the Dec. 12 meeting. “This time, we came over here and we handled the pressure pretty decent. They knew that they could compete. After the first four or five minutes, they knew. I told them before the game that belief goes a long way.”

Mercer coach Hayley Spivey said that she liked the pace that her team was playing at, but not the intensity she was seeing on either side of the ball.

“Our goal every game is that we want to score 20 points a quarter. We scored 20 points, but Garrard County scored 21,” she said. “We’re playing the fast paced game and stuff, but we had no defensive intensity and that’s where we struggled. Offensively, I’ll be honest, I told them that we didn’t play very good team basketball tonight. It just didn’t seem like things were flowing well. I didn’t even necessarily think we were being selfish — it wasn’t anything like that. It just wasn’t a great team effort.”

One of the things that changed the tide of the game was the performance of Mercer senior Channing Lewis who finished the game with 36 points and 12 rebounds. 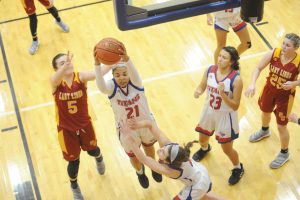 “I took her out early in the first quarter. I wasn’t really mad at anything she did, but I told her ‘Honey, you need to take control,’” Spivey said. “‘You’re the senior. So when we’re struggling a bit, you need to take control.’ She responded really well. She went back out there and that’s exactly what she did. Sometimes you have to have those games where you take over and that’s what she did.

Garrard had a senior leader of its own step up in the form of Carolina Gonzalez who finished with 19 points and hit five threes. 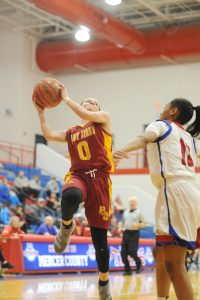 While it’s nice for Garrard County to see Thursday’s game as a moral accomplishment in playing Mercer tough, McCulley said that his team still wants to win these kinds of games.

“I’ll be honest, they’re disappointed. Not in the way they played, but with the score,” he said. “And they should be. If they weren’t disappointed then I’m not doing my job. They’re finally, hopefully, getting the belief that we are pretty good when we come to play and lay it all on the line for 32 minutes.”

For Spivey, she has confidence that no matter what, her team is going to find a way to pull a victory out.

“They’re competitors, I’ll give them that,” she said. “They’re going to find a way to compete and find a way to win no matter how ugly I think it is or how we’re struggling. Rough start to the game, but a better second half.”

In the night cap, the boys followed a similar first quarter pattern.

Garrard County shot 5-6 from behind the arc to get on Mercer quick and take a 22-21 lead going into the second quarter. But the Titans ramped up the defensive pressure and held the Golden Lions to 29 points for the remainder of the game and took a 74-51 win.

“Credit to Garrard. We talked to the coaching staff. They hadn’t had a game where they’d shot the ball since they’ve been missing (Brayden) Sebastian,” Mercer coach Josh Hamlin said. “You come out in the first quarter and go 5-6 from the 3-point line in eight minutes — you only score 22 points and 15 of them are from three. That’s one of those things where you’re like uh-oh.”

The Lions have been without Sebastian for most of the season but were also down Hudson Cornett, the team’s leading scorer this year for Thursday night’s game.

“That’s our two leading scorers. I’m proud of the kids and how they fought,” Garrard coach Ryan Young said. “I told them in there right now once — we get everybody back and healthy, I don’t think anybody is going to want to play us.”

Being without the team’s two stars forced other players to step into an increased role, and eighth grader Montavin Quisenberry answered that call, scoring a team high 12 points. 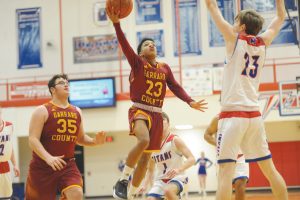 Garrard guard Montavin Quisenberry led the Lions with 12 points and played a physical game despite his age and size. (Photo Derek Brightwell)

“He’s very special. He played hard tonight,” Young said. “We knew it’d be a challenge with the (Jamisen) Lewis kid as a vet. I felt he played him toe-to-toe tonight. He’s just going to be a special player.”

The third quarter was the turning point in the game. Mercer outscored the Lions 20-5 in the period to put the game out of reach. But coach Young liked the intensity that he saw out of his team in the second half as a whole.

His team got to the line 18 times in the second half, compared to only two in the first. He said he preached intensity during the intermission and wanted his team to come out fighting.

“I told them to compete. I reminded them of the old 46th District rivalry that this used to be in the early 2000’s. I wanted them to play with a lot of pride and take pride in their community,” he said. “Mercer is a great team, but I was proud of a lot of the kids tonight on how they fought. We just couldn’t make a basket in the third quarter and it kind of snowballed on us.”

Mercer got a big game from Sam Baughman who knocked down six threes and scored 19 points.

“Sam works really hard. He’s very streaky but when he’s on, he can get hot quickly. His confidence builds in a hurry,” Hamlin said. “He’s had some streaks like that this year. I was more impressed with his defensive effort tonight. I thought he battled defensively. Rebounding the ball — even though it might not show up in the stat sheet because he only had three — he got his hands on it. He played an all around good game.”

As a team, Mercer shot the ball incredibly well. The Titans hit a season high 14 threes, shooting 50 percent from downtown and 48 percent from the field on the game.

They also got solid play from senior Kobie Wessling who primarily impacts the game on the defensive end of the floor but had a team-high four assists Thursday.

“Kobie’s a glue guy. He knows this,” Hamlin said. “He’s not the most intimidating guy, but he adds a toughness to our team that sometimes we’ve been lacking. That’s been really important for us these last couple games. Any offense you get from Kobie is a luxury because he makes his calling card on the defensive end. He is really tough to replace because he does a lot of things right defensively.”

But once again, the spotlight was on star senior Kaelin Drakeford who earned yet another double-double — his eighth of the year — and was tied with Baughman for the team lead with 19 points. 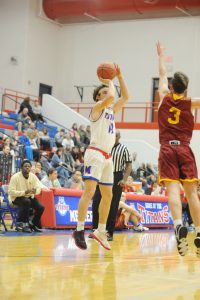 “I said since the very first day that Kaelin Drakeford is the best all around basketball player in this region. And he’s done nothing short of showing everybody that,” Hamlin said about his star. “Right now there is not a kid who’s more deserving to win region player of the year. He’s the best senior in this region and he’s averaging 21 and 10 or 11. He’s shooting 80 percent. He’s a leader. He does everything that exemplifies what it means to be the region player of the year.”

The Titans — both the boys and girls — will take on the winner of Friday night’s double header between Lexington Catholic and Boyle County. Garrard’s time in the 2A Classic ended Thursday night.