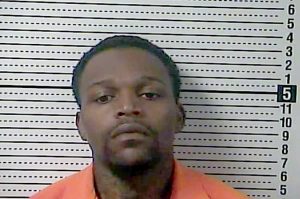 Christopher Deandre Francisco, 29, faces charges of trafficking in methamphetamine, tampering with physical evidence, disregarding signals from officers directing traffic and second-degree fleeing or evading police in a motor vehicle. He was being held in the Boyle County Detention Center Monday without bond because of a parole violation, according to jail records.

Danville police officers originally responded to the area of Harding Street around 3:30 p.m. on Saturday for a report of “a male trying to push a female’s head through a storm door,” according to a news release from the Danville Police Department. “As Officer Lewis arrived on scene, he observed a vehicle leaving the residence with a male driver and female passenger. Lewis was walking toward the vehicle and shouted for the driver to stop, but the driver continued driving. Lewis returned to his patrol vehicle, activated his emergency equipment and was able to stop the vehicle.”

Francisco allegedly identified himself as “Joseph Francisco” from Georgia, according to police. But when two other Danville officers arrived, they recognized the man as Francisco. He was placed under arrest due to the multiple outstanding warrants.

While at the scene, a fourth Danville officer located suspected methamphetamine and approximately $1,000, which led to the new charges against Francisco, according to police.

The outstanding warrants were for charges of being a persistent felony offender (two counts), tampering with physical evidence and trafficking in cocaine, among others.

“The passenger in the vehicle was also arrested on an outstanding warrant,” according to the release.