UK football players “blown away” by experiences on mission… 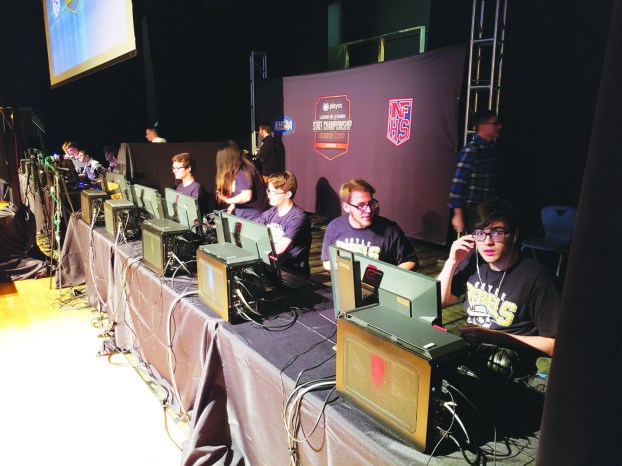 Boyle County at the KHSAA League of Legends State Championship, the Rebels were the first state champions in League of Legends. From left are Camren Elkins, Kat Lark, Devon Britton, Bryan Stocker and Trey Gordon. (Photo contributed by Damian Laymon)

Last fall, the Kentucky High School Athletic Association added a new sport to its winter and spring schedule, eSports. In that time, high schools across the state have garnered enough support from their students to field around 50 teams for each of the three video games offered competitively. Some schools, like Boyle County, had enough interest to field multiple teams per game.

LoL was the only sport offered in the winter season, dubbed Season Zero. And in that, Boyle County became the first ever eSports state champion.

“Boyle County has a rich history of championships in a lot of different things,” eSports coach Damian Laymon said. “So many of the kids were proud that there was just one more  thing that Boyle County could bring a State Championship home in.”

Rocket League is a hybrid of soccer and cars, played in a physics defying arena. Since its release in July, 2015, it has quickly risen in popularity, not just among casual gamers, but in the eSports realm as well.

League of Legends, a multiplayer battle arena game relying heavily on strategy, is one of the most popular in the eSports competitive scene. The 2017 World Championships had over 60 million viewers and awarded a total prize pool of over $4 million. 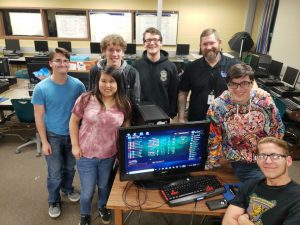 With the popularity of video game streaming services like Twitch, it should be no surprise that there was immediate interest among students for eSports when the KHSAA put out feelers in October of last year.

“I mentioned it to a couple of students, and they immediately put together a list to show the administration that there was going to be interest in it and it just took off from there,” said Laymon, who also teaches computer science at Boyle.

In Season Zero, Boyle had 16 players on the team, by Season One in the spring, that number had jumped to 27. Laymon thinks that it will only get bigger.

“I really do (see it continuing to grow) because the wealth of different types of games that the students can play,” he said. “As soon as the kids found out they were adding Rocket League, that brought in kids who were your more conventional sports fans that also liked to play video games.

“One of the big draws, I think, to something like eSports is that the vast majority of people have played it,” he added. “When you look at something like football fans, well a lot of them are fans because they played football in school and have fond memories of it. So I think that opens the door to it quite a bit right there. If they keep adding more different games and different events, I think that creates a much bigger draw.”

“I’ve played through the years. At my old school in Harrodsburg, we’d have LAN parties on Saturdays where we’d have 20 kids come in,” he said of his own history of video games. “We’d have a server that was set up specifically for the first Call of Duty and it was a lot of fun and those were such fond memories of doing that. I knew there was potential for it.”

Laymon also says that he has already been contacted by other schools about how to build programs of their own.

“I think Danville is getting one up and going. So that’ll be a new rivalry that we’ll get to start between us and them,” he said laughing. “So they’ve contacted me about how to get things up and running and get the ball rolling.”

In Season One, with more competition and added games to compete in, Boyle fell just shy of repeating as champions. It finished in the quarterfinals in both Smite and League of Legends, and the semifinals in Rocket League. But, the teams that defeated them in LoL and Rocket League went on to become state champions.

Laymon says that he was the natural choice to be the first coach of Boyle’s eSports team because of his role as computer science teacher and that most of his first team were his students. Despite that, his background isn’t as deep as coaches in other sports.

“In that first season, a normal practice was really me just watching them and trying to learn. I asked more questions of them than I did coaching,” he said, acknowledging that he had never played League of Legends until becoming the coach.

But quickly, he adapted and realized that coaching is coaching no matter the sport.

“When we got toward the end, and I understood it a lot better, I was better able to kind of work with them on, like we have kids who are a lot more prone to getting frustrated and just going in and making bad decisions,” he said. “We’d talk about that sort of thing.

“A large part of it was communication. Teaching these kids how to communicate with each other. How to develop a game plan, that was a really big part of it. That came because I saw that they were doing that anyway, and then I realized that was so important.”

In the championship game in Season Zero, he said that his team scouted its opponent, learned exploitable weaknesses, made a game plan and then executed it.

As eSports grows in popularity throughout the world, and as professional gamers have their profiles raised on social media sites, criticisms have been lobbed at the rising sport from people who consider themselves “real sports fans”. Laymon said his players don’t let that affect them, and that the student body has been largely supportive.

But it’s opened a dialogue about what actually makes a sport a sport. According to Laymon and the Rebels, the only thing eSports lacks is the physical element. The strategy, game planning, communication, and trusting your teammates is all there.

With the first full year of eSports at the high school level complete, and according to many, a success, the only question is where does it go from here. It’s a growing sport, not just in the amount of schools who are fielding teams, but also in that there is a plethora of games that could be incorporated into competition going forward.

“They haven’t announced any (new games) yet. I think Overwatch is one that a lot of kids have been asking for,” Laymon said. That’s a big one, there. That’s the only one that I know my kids have been clamoring for.”

But, he acknowledges that Overwatch, a team based arena combat first person shooter, might be a difficult game to sanction at the high school level.

“You’ve got to balance that first person shooter with reality and all that kind of thing, but what I’ve seen of Overwatch, it seems more cartoonish. I know that’s something they’ve always got to keep in mind, at least in the high school level.”

Another issue with expanding the game pool is resources. A school would need to have a computer lab that can handle all of these games, and run them fast enough to play at a competitive level. At Boyle, at least, a planned improvement of the computer lab has simply been upgraded to become an eSports quality lab as opposed to one you’d find at a normal school.

Despite these challenges, however, eSports does seem to be growing at the high school level at least as fast as it exploded onto the national scene. And with colleges fielding teams and several games sponsoring professional leagues, it doesn’t seem to be slowing down any time soon.