New program allows inmates to ‘give back’ to the… 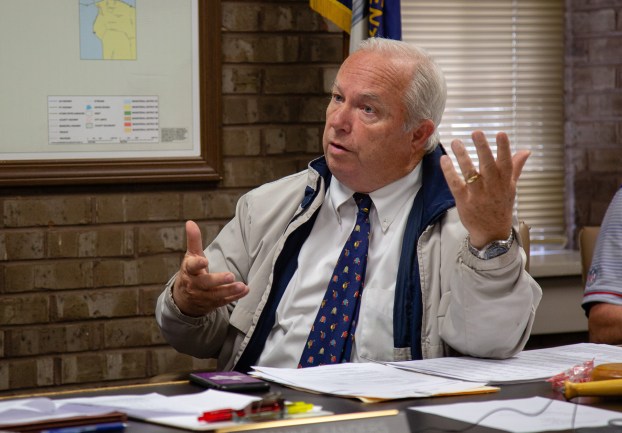 Boyle County Judge-Executive Howard Hunt said Tuesday the county cannot continue to run a deficit in its general fund every year or "the pie's going to be gone." Photo by Ben Kleppinger.

Magistrates were asked to consider giving $4/hour raises to part-time staff at Boyle County EMS next year. More than half the fiscal court said they had serious doubts about the plan.

“This will keep us competitive with surrounding counties” that are already paying in the vicinity of $15 an hour, EMS Director Mike Rogers told the fiscal court as they considered the proposal. 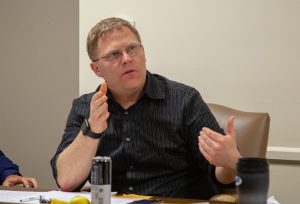 Rogers said raises for part-time workers is needed because it’s currently difficult to attract part-timers. Without dependable part-time help, the EMS department’s full-time employees, many of whom already pick up more than 1,200 hours of overtime every year, have to pick up even more overtime to fill the gaps, he explained.

But Rogers had a second request of the fiscal court as well — one not currently in the proposed budget: “I don’t think it’s fair to raise our part-time without raising our full-time” pay rates, he said. Rogers asked magistrates to consider a 25-cent or 50-cent per hour raise for nearly all full-time EMS employees.

Rogers said while the increases for part-time workers are necessary for EMS to function well, it wouldn’t go over well with full-time employees if they got no raise at the same time.

Conley noted the county has been “eating into” its general fund balance — losing money — for several years running. Three years ago, the general fund dropped by about $200,000; two years ago by around half a million; and this year it will fall another $200,000, she said.

“You can’t keep eating into it or the pie’s going to be gone,” Judge-Executive Howard Hunt said.

Magistrate Phil Sammons put his foot down on giving out more raises, noting the county is already planning on a 50-cent increase for jail employees, after the jail got a 50-cent raise mid-year this year. “We just can’t keep giving in to this,” Sammons said.

Magistrate Jason Cullen soon noted that most of the county departments had their pay scales adjusted several years ago so wages would be in the 75th percentile, meaning they get paid more than about three-fourths of people in comparable jobs. However, those adjustments weren’t made at the jail until now.

“We’re actually just trying to catch up the jail,” Cullen said of the jail raises. “While your staff does a fantastic job, they’ve been caught up already. We need to make sure that everybody else is all on the same playing field.”

Conley confirmed the 50-cent raise proposed for jail staff would bring them in-line with the 75th-percentile target set by a salary study completed several years ago.

Rogers said if the court isn’t interested in giving full-time raises, he would like the part-time raises taken out of the budget. But magistrates noted the budget isn’t finalized and there’s still time to discuss further before making a decision.

Magistrates discussed the possibility of implementing a $2/hour raise for part-time employees and a 25-cent raise for full-time employees as a possible compromise. That proposal would have an estimated cost of $43,000, compared to the $36,000 currently in the budget. 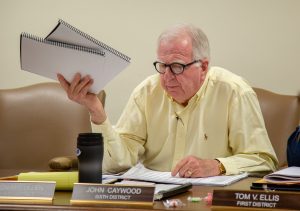 Magistrate John Caywood was among several on the Boyle County Fiscal Court who expressed concerns about a proposed $4/hour increase for part-time EMS workers. Photo by Ben Kleppinger.

“I’m hearing from our professional staff that they can’t attract people,” Gay said.

“Well let’s pay them $50,000 because at some point another county is going to attract them with even more and we’re going to have the same problem,” Cullen responded. “We’ve got to start somewhere; we can’t just dive in at an additional $4 an hour. Because honestly, if you give them a $4/hour raise, a quarter’s going to mean nothing to the full-time people.

“… Believe me, I want them to have as much as they can have, but the reality is we have needs and wants and we need to make sure we can pay for everything.”

The proposed budget includes general fund contributions to the EMS department of just over $1 million and revenues from billing for medical runs of $1.26 million. There’s also a chance the department could receive around $186,000 in grant funding. Rogers said he’s working on some changes to how EMS bills, including beginning to charge schools and festivals an hourly rate when they want an EMS crew stationed at an event such as a football game.

EMS may also soon begin billing Medicare for non-transport runs, such as when a crew goes to someone’s home to help with a diabetic emergency or an elderly resident who has fallen and can’t get up.

“A lot of the other agencies around us are already billing for that,” he said. “I think it just makes sense for us to start.”

Rogers said Medicare hadn’t previously paid bills unless a patient was transported by EMS. That’s changing now that the federal government has realized it was incentivizing transport of patients when they didn’t need transport.

In the case of a diabetic patient who just needs to eat something to get their blood sugar under control, transports wind up being notably expensive, he said. “If they take them to the hospital, all the doctor is going to do is give them a sandwich and send them home with a big bill.”