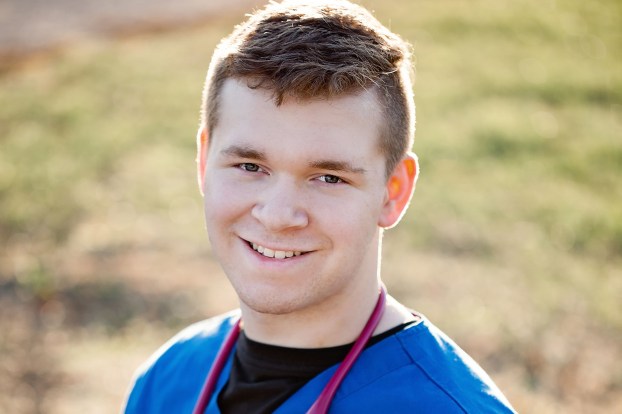 Despite the many challenges in his young life, Destin Newman is accomplishing his goals. Newman has been awarded a 2019 Horactio Alger National Scholarship to use in pursuing his dream of becoming a nurse practitioner for a trauma unit at a metropolitan hospital. (Rhonda Cunningham Photography)

A Boyle County High School senior has overcome many challenges in his young life and his perseverance has paid off in part by earning a prestigious national scholarship to continue his education.

Destin Newman, 18, will graduate high school in May and will be attending Thomas Moore University in the fall. He plans on becoming a nurse practitioner for a trauma unit at a metropolitan hospital, he said.

Recently, Destin was awarded a 2019 Horatio Alger National Scholarship in the amount of $25,000. The award also includes an all-expense paid three-day trip to the Horatio Alger Conference in Washington D.C. in April to receive the award.

The college scholarship “specifically is to assist high school students who have faced and overcome great obstacles in their young lives,” according to the program’s website. “While many programs are directed primarily to recognizing academic achievement or leadership potential, the Horatio Alger Association seeks students who have exhibited determination, integrity and perseverance in overcoming adversity, as well as have critical financial need.”

And Destin is a perfect example of that type of special student.

Sitting around a large dining room table in the home where he’s lived for the past two years with David and Diana Ballard in Danville, Destin described his childhood growing up around drug use and how all of the issues of someone else’s addiction affected him.

By the time he entered fifth grade, “I was like, so stupid, because I never went to school. My mom never made me, so I was really truant. I went to court every year.

I could barely read. They diagnosed me with a learning disability. And they told me that I probably was never going to learn like the other kids. So instead of giving up, I felt kind of challenged,” Destin said quietly.

“And now I’m an AP honors student at Boyle County,” he said grinning widely at Diana. 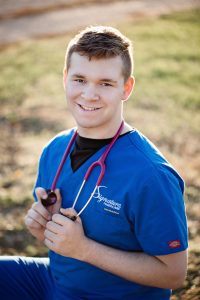 Destin was in and out of foster care for several years before being returned to his family. Things at home didn’t get any better for Destin but he said he was determined not to fall into the cycle he was witnessing around him.

However, He’s found a stable home with the Ballards now.

He realized as a young teen that he was going to have to rely on himself to make improvements in his life, so he concentrated on his grades and went to work at McDonald’s when he was 15. He stayed there for a year then worked at Burger King for another year and was able to save about $10,000, while still going to school and living wherever he could find a place.

When he was 17, he began working at Cracker Barrel as a retail associate, where he continues to work about one day month. He also works at Fazoli’s about 15 hours a week and is a CNA at Danville Centre for Health and Rehabilitation for two 12-hours shifts on weekends.

Plus he has a 3.2 grade point average. And he loves learning. “I want to learn to the day I die.”

Another smaller obstacle that Destin is about to put behind him, is a car payment. He had a car but due to someone hitting him who didn’t have insurance, Destin had to buy another vehicle. But in another week or so, he’ll have it paid off, he said.

But he’ll continue paying his cellphone and car insurance bills, he said.

Destin’s high school resumé also shows that he is president of the HOSA-Future Health Professionals chapter at BCHS and a member of the Y-Club, among other activities he’s been involved in during the course of his high school career.

Destin said the Department of Labor shows statistically, he only had a 9-percent chance of graduating college. But he intends on beating that statistic.

“I just want to be successful,” Destin said.

“Success to me means doing something to make someone else’s life better. It could be as little as making someone smile, or as big as saving their life as a nurse. I feel like if I didn’t dedicate my life to others, I’d be wasting it. I want to hold the hand of a patient when I deliver their best news, wipe away the tears of family members when I have bad news, and hopefully leave this world knowing that I dedicated my whole entire career to promoting happiness, compassion and love to people who may not even remember my name. Knowing that I used my hands, my mind and my skills to better the life of someone else is what truly makes me happy. “

Destin added, ” I often times forget how significant my life events have been because, to me, it’s simply reality. Though, for people looking in, it seems like an unfathomable experience. I’ve got to be successful. That’s my only option.”