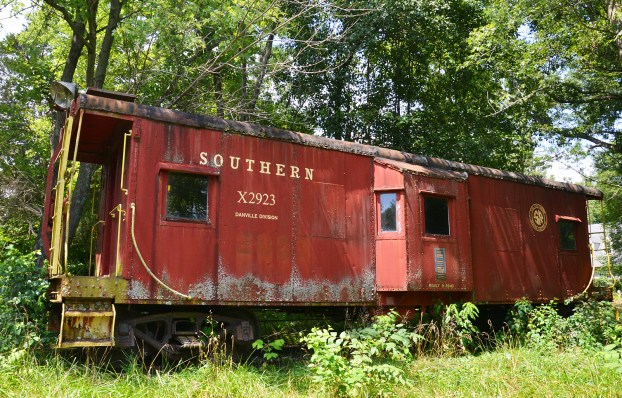 A vintage red caboose, sitting all alone among shade trees and gangly weeds, far from any working railroad tracks, needs a new depot to park in.

The Boyle County Industrial Foundation is selling a 1941 caboose that’s sitting on a tract of land it has owned for several years. The foundation is contemplating what to do with the property, but first the caboose has to be removed.

Now, the foundation is going public to sell the old car. 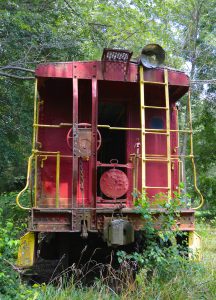 Robin Hart/ robin.hart@amnews.com
The back view of the caboose from 1941 sitting on a tract of land owned by the Boyle County Industrial Foundation.

According to a Facebook post, the foundation is asking the appraisal price of $11,000 or best offer. The trick, Albright said, is getting the caboose moved. It’s going to take someone who loves trains and who has the resources, he said.

The problem isn’t that the caboose weighs 25 tons. It’s the narrow steel wheels that will sink into the earth and destroy blacktop. But the Foundation knows a company that can make the arrangements, he said.

Inside the old caboose the paint is peeling and some birds’ nests are tucked in the ceiling, but the beauty is that it still has its original parts and paint, Albright said.

The previous owner of the caboose was Bob Lawson, an enthusiastic model train collector.

According to a sheet of paper tacked up on an interior wall, Lawson wrote, “About 35 years ago, it was given to the Danville Police Department to house ammunition for weapons training. About five years ago it was offered to Judge Harold Burks. His wife wisely said, ‘NO’ in her backyard, so Harold asked me to store it for him.”

The caboose is number X 2923 and was in the first run of steel cabooses on the Southern Railroad.

According to the page, it was “built for use where ‘helper’ service was needed and track sidings were scarce, causing the helper locomotive to be pushing the caboose behind the train. After several wood cabooses were crushed, the mechanical department decided to convert some box cars into cabooses. There were 50 built at one time using a boxcar structure.”

The caboose needs restoration, but Albright said he expects somebody will want it and will have a use for it. “It’s pretty cool.”

For more information about purchasing the caboose, call Jody Lassiter at the Boyle County Economic Development Partnership at (859) 236-2361; or email, bcif@developdanville.com. 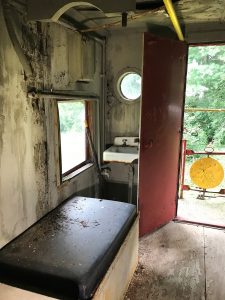 Photo by John Albright
The back end of the caboose holds the ice chest, in bottom left corner, and the original hand sink.