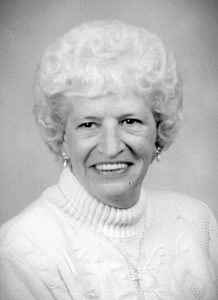 Naomi graduated from South New Berlin High School in New York. She traveled with her late husband, Stewart Burt and attended many Scientific Glassblowing functions with him. They retired to Danville and joined the First Baptist Church where she was a member of the PrimeTimers Choir for many years.

She also was active in the Wilderness Trail Homemakers Club. In addition to travel, Naomi loved to knit, read and water ski.

The funeral service will be 1 p.m., Wednesday at First Baptist Church, Danville Bypass. Entombment will be in the Danville Memorial Gardens. Visitation will be from 11 – 1 p.m., prior to the service.

Memorial donations are suggested to the First Baptist Church. Stith Funeral Home is arranging the services. The online guestbook and memorial page is available at www.stithfuneralhome.net.