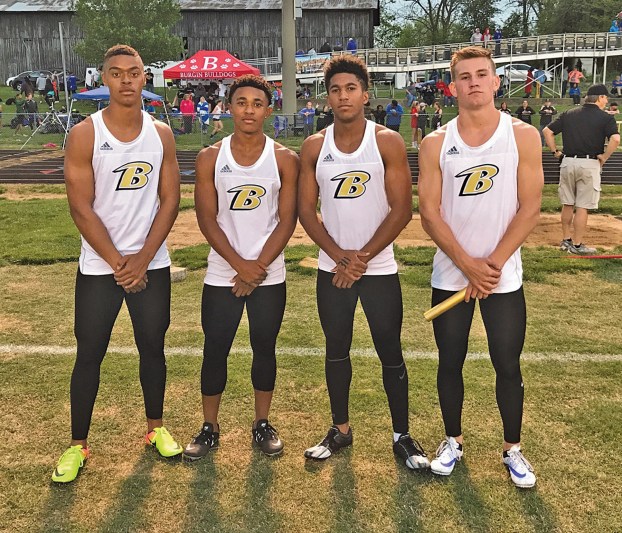 Matt Overing/matthew.overing@amnews.com Boyle County sprinters, from left, Landen Bartleson, Marquise Kinley, Chris Duffy and Reese Smith pose for a photo after winning the boys' 4x100 meter relay at the Boyle County Invitational. They are looking to repeat that success at the region meet today.

He didn’t expect they’d be this good.

The Boyle boys’ track team has taken major strides this season to be one of the top three teams in Class 2A, behind Mercer County and Paducah Tilghman. A major part of that improved success is down to four underclassmen sprinters: Marquise Kinley, Reese Smith, Landen Bartleson and Chris Duffy.

“Landen is very versatile. At the beginning of the season, in our minds, we had him in different events than he’s in now,” Wagner said. “It’s just the fact that we didn’t realize that we were going to get three other guys that are fast as well, that we could run them as a relay. That’s the biggest surprise we’ve had this year. … We get out there, we see these guys go and we’re like, ‘Oh, holy cow. If you put them together, you’re talking big state points.’ It’s huge to have them.”

Bartleson ran track when he was younger, so he and the coaches had an idea of what to expect. But even he didn’t expect to do so well.

“I didn’t expect us to be this good,” he said. “We just come to practice ready to grind every day.”

The 4×100 relay won the GRC Heavy Metal Showdown at Transylvania on April 8 with a 44.50-second finish, nearly beating the school record.

Less than two weeks later, they broke the record with a 43.68 time.

So much success early in the season could’ve been a problem, but not with this group. Sprinters’ coach Seth Tamme said he’s had to keep them grounded at times, but they’re doing a good job staying motivated.

Some of the best competition comes through practice, Wagner said, much like it does with their top-ranked girls team.

“The good thing is they’re all really fast. They’re all four great sprinters,” Wagner said. “So we make them compete against each other. It’s all about competition. In a relay, it’s about dominating your leg. You’ve got to do your part. You can’t leave someone hanging. If all four give 100 percent on the same day, good things happen.”

Having four sprinters who can compete against each other is a luxury, Wagner said. It’s something he doesn’t want them to take for granted.

He gave the example of coach Tamme, who during his time at Boyle didn’t have such a luxury.

“We tell them real-life stories from when we ran,” Wagner said. “Not so much reliving the glory days, but about how beneficial it is for them to have four guys that fast. When Seth Tamme was here, Seth ran an 11.2 and there wasn’t a guy close to him. He’s out there trying to motivate himself, run by himself. I’m sure he would’ve killed to have these guys around him to build a relay and compete against each other. We say the same thing with the girls side. We’re fast as a team on the sprinters side, that’s a huge luxury to have.”

Tamme said even in his time as a coach, having multiple sprinters capable of scoring points at region hasn’t happened until this year.

“It’s kind of crazy that, since I’ve been here, all we’ve wanted is guys that can run 11.5,” Tamme said. “Just one guy to run 11.5 so they could be in the hunt at region. Now, we’ve got four of them. It’s insane. And they’re three freshmen and a sophomore. They don’t realize how fast they are. They have no idea.”

When Wagner saw those times, he and his coaching staff lit up.

“We knew we were fast, as the coaching staff, we didn’t know that we would be that fast that early,” he said. “When we saw their times in the 100, we put them in a relay and we knew right away that they were going to be real, real fast.”

Duffy, the sophomore of the bunch, said he wasn’t sure what this season would be like. But from success in meets to practicing against some of the best in the region every day, it’s been a surprise.

“I honestly had no idea what it was going to be like,” Duffy said. “We just have great coaches, we bought into what they’re telling us. I’m just lucky that I have a guy like Landen to go against in practice. We really do come out here every day and push each other as hard as we can. It’s been fun.”

Tamme said Duffy gets frustrated when Bartleson beats him in events. They’re the go-to duo in the 100 and 200 events for the team.

“Chris Duffy has blown us away,” Tamme said. “He’ll get mad sometimes because he doesn’t feel like he’s good enough. He’s measuring himself up with Landen Bartleson, who is already one of the best sprinters in our program’s history. What Chris doesn’t understand is that he’s doing amazing. But he gets frustrated because he’s not with Landen some of the time, but we tell him, ‘Dude, you’re so fast.’

“The other two are fast as well, they’re just in other events. We could pick our choice between the four of them to run the 100. The years I’ve been here, we’re just trying to find one. Now, it’s like, ‘Well, we have four of them. Who do we put where?’”

Tamme’s the reason for Smith’s involvement. After football and basketball, Smith said he wasn’t planning on running track. But Tamme got him involved.

“He’s my coach in football, so it just carries over. He keeps pushing me,” Smith said. “I wasn’t going to come out for track at first, then he said to come out because it would help. Since he was coaching, I figured I would.”

Tamme said getting football players on the track is a boost for both programs.

“We usually try to get football kids out because track helps you get faster for the football field, and on the track we’re better because we’re getting some athletes,” he said. “They come out here and run on the track, they get their speed built up, and then it’s confidence. You take four guys that play football and they go and perform at the state track meet, when they get on the football field, they’re going to think that they’re fast. They know that nobody can run with them. That’s just a big confidence boost.”

Kinley and Bartelson both said their running form has improved greatly with track.

“Coach Tamme, he’s a really good coach,” Kinley said. “He’s helped me with football and track, he stays after to help you get your form, get it right so we can do it perfectly.”

Another coach who has been a major help is Krista Rinehart, Wagner said. Rinehart — better known as Coach K — takes care of the handoffs.

“Coach K does well with the exchanges, because at the end of the day, she doesn’t sugar coat anything,” Wagner said. “If it’s not fast enough, she tells them. It’s straightforward. Ever since she has taken over, we’ve gotten results in our relay exchanges year after year.”

Kinley said handoffs on relays have been the toughest adaptation for the group this season.

“I’d say our biggest challenge would probably be the handoffs in the 4×200,” he said. “Sometimes it’s real crispy and sometimes we just can’t get to it.”

Wagner motivates them through those challenges: If any of the four doesn’t give 100 percent during a relay, they’re letting the other three down.

“There have been meets where we’ve been really, really good and 85 percent is good enough,” Wagner said. “But they found out really quickly that 85 percent is not good enough when you’re looking to hit the goals that we’re trying to reach. The stronger they are individually, the stronger we’ll be on the relay.”

Tamme said the environment Wagner has built in practice has made for an enjoyable year. They’re “focusing on speed” and nothing else.

So how good could they be?

“I don’t think there is a bar. There’s really not,” Tamme said. “We’ve got three freshmen and a sophomore, they’re all crazy fast and starting to peak at the right time. I’m not putting a bar on them. Whatever they want to do, they can go do it. I hope everybody in the community realizes how special this group can be and enjoys it.

”They’re all great kids. They’re fun to win with, watch win. When it comes down to it, they work extremely hard. That’s really what you want as a coach.”

The biggest prizes are still to come. Today’s region meet, which the Rebels host, will be a major task for the group, with Mercer County holding the top 4×200 meter relay time in the region.

“We keep them grounded, but it’s also through motivation,” Wagner said. “We post to social media when they do well. They get press when they do well. That holds them accountable, as far as they want to make sure that they do that again. They want to be the talk, but they’ve got to do what it takes. They’ve got to work on handoffs, work on the little things and get better in practice.”

Having a chance to not only earn points at region but also at state doesn’t happen often for the Rebels.

“We’ve had success from a region standpoint since 2012, 2013,” Wagner said. “We’ve had region champions in the 100s for boys and girls. But on the state level, this is the first year that, ‘Oh, holy cow, we have an individual ranked first in the state.’ We’re not used to having that type of raw speed. It’s fun to coach and it’s fun to watch, you’ve just got to keep them grounded and let them do their thing.”

Smith said they’re hoping to seize their opportunities this weekend and at state.

“It’s definitely been a blessing, I feel like we have something special because we are freshmen,” he said. “You don’t really see freshmen running against seniors and stuff. You’ve just got to take advantage of it. Now, though, nobody looks at us like we’re freshmen. You either win or you lose.”